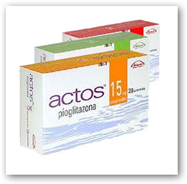 The big case here is about the fact that the danger of developing cancer by taking Actos was hidden and not fully exposed.  Bladder cancer patients who have taken Actos are being advised to seek professional legal advice as soon as possible. Click here for more information.

After approval a 10 year study was ordered the FDA and the risk of cancer apparently was much greater than Eli Lilly and Takeda originally stated.  There have been meta-analyses to confirm the connection of the risk of cancer with the drug.  If you have taken Actos especially for a prolonged length of time and were diagnosed with cancer you may have a claim here.

Lilly was ordered to pay $3 Billion and Takeda $6 billion.  The jury with the award believed the case presented that the drug companies went to extra measures to hide the apparent connection to bladder cancer with distorting the science in order to capture market share.  BD

A US jury has fined Takeda and Eli Lilly $9 billion (£5.4 billion) for causing a man’s bladder cancer with their diabetes drug Actos (pioglitazone). The verdict came down hard on the companies after the case unearthed evidence that Japanese company Takeda had deleted emails, at least one of which raised concerns over Actos’ safety. ‘This serves as a wake-up call to those pharmaceutical companies that cut corners and hide or distort the facts rather than openly testing and educating about their drugs,’ Mark Lanier, who represented the plaintiffs, tells Chemistry World.

Takeda was unable to produce files for 46 clinical and sales employees, 38 of which were deleted after it ordered documents be preserved in 2002 ahead of legal action over Actos. ‘The breadth of Takeda leadership whose files have been lost, deleted or destroyed is, in and of itself, disturbing,’ wrote Judge Rebecca Doherty in a January ruling. But Lanier’s legal team, acting on behalf of Terence and Susan Allen, retrieved one key exchange by going to its recipient.