Home » Insurance » Medically Related » Other Items of Interest » NueMD Releases ICD10 Survey Results - No Real Surprises And Changes From the Year Before..

NueMD Releases ICD10 Survey Results - No Real Surprises And Changes From the Year Before..

The results were tallied just before Congress enacted the delay.  As you can see claim and payer delays were the first up front concern as that makes sense as without money, nobody operates.  There were really no surprises here; however you may have been reading subsequent news that this is not having a good effect on some larger concerns who had already set aside budget money for the transition which entailed extra personnel, training and so on.  NeuMD is an advertiser at the Medical Quack and you can find them on the right hand side of the blog to explore and see what services they offer.  BD

ATLANTA, April 15, 2014 /PRNewswire/ -- Just before the transition to ICD-10 was officially delayed, NueMD conducted a survey of 1,300 healthcare professionals to gauge their attitudes towards ICD-10. The survey, which garnered responses from all 50 states, found that 55 percent of respondents thought the transition to ICD-10 should be delayed or should not happen at all.

In comparison with a 2012 survey that asked the same question, 56 percent of respondents wanted a delay or no transition, suggesting there hasn't been any change in attitude over the 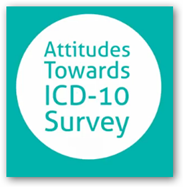 The survey also measured healthcare professionals' thoughts on financial and operational effects of the transition, state of mind, and trusted information sources. The responses carried a negative sentiment across the board.

"My primary advice is for medical practices to communicate closely with their vendors. Find out what your vendor is doing as a result of the new timeline, and find out how this will or will not impact any current or future implementation efforts."