That was the huge selling point of Obamacare with people not being eliminated with pre-existing conditions and that was popular with everyone it seems no matter what political party one was.  Now through another model of reducing available networks for care, we are starting to see the same end result.  This story below is about a woman in New York that has a neurological disease and has had brain surgery. 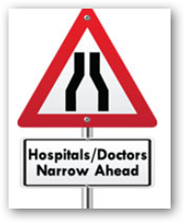 She bought an Obamacare policy and can’t get in to see a new doctor and is now denied her medications.

There are 6 doctors in her network that will take her plan, but she can’t get an appointment for what ever reason with any of them.  Her prescriptions are denied.  She had to get a Congressman to intervene to get some of her prescriptions and there are others in the same boat.  Top cancer centers are now no longer on the list either so we have these new models that are being used with restrictive networks that are netting the same results, no care.  Even within their own business intelligence, and here’s one example below where United goes out and bids and finds their restrictive networks they established didn’t allow for any doctors to see patients.  This was a Medicare Advantage contract they bid and were awarded for a retiree plan.  The county has to rescind it because they had restricted the network of available providers down to such a definitive list of criteria, that there were none left to keep in network, but as we are always told “this is a business decision”.

As I wrote in a recent post at the link below, in essence the “death panels” are not gone, they have taken a new shape and are now algorithmic formulas that show up and based on criteria used, care is denied, so now I guess we can say it’s a business decision made by the criteria of the algorithms that run on servers 24/7 making life impacting decisions about all of us.   This is how modeling and math formulas work.  I urge you to watch the 4 videos in the footer of this blog to get a better idea of how you get duped on some of this and how models work for profit.  The information is a lot about the financial markets but you have the same thing with models with insurers and they too are hiring new Quants to create risk assessment models for profit.

This is what worried me way back when the law was created that the government would be “out foxed” by insurers as that’s what they do as we have years of denials due to pre-existing conditions that denied care and now with smaller networks they are using a new risk model for profit and people don’t get care.

Whether you want to see how this works or not, this is it and how and why this happens.  Government is outdone with for profit business models and this is what banks and insurers do all the time, work the models and we are not able to see exactly how it all computes as that’s proprietary computer code making the decisions as the formulas run on servers 24/7.  Here’s the latest on United Healthcare kicking doctors out of network that see Medicare Advantage patients too, their business intelligence algorithmic formulas.  Right in New York where this patient is located, here’s the scoop on doctors being dropped right and left by United Healthcare.

But if you happen to be the wife of banker, the company seemed to have no problem paying over $175,000 for a hammer toe procedure, so again what type of business intelligence are insurers using here.  The money sent to that doctor sure would have been a welcome sight for this patient who has been denied.

The game just like what happens on Wall Street is fixed here too and thus I call this yet one more Attack of the Killer Algorithms.  Here’s a former Wall Street Quant that now does a lot of work with the Occupy movement that did a video that explains how this works too, it’s all modeled.  Killer Algorithms exist when math and formulas deny consumers access to care, money, etc. when the data is all wrong and/or flawed or just modeled for profit and my series shows every day events where this occurs and hurts consumers.

I also asked the question recently too on how long before we begin calling health insurance a “science” as that’s what we seem to do today is call everything that has become complex with extreme business models, a science.  Again with all the talk about the markets today being “rigged”, well this too is rigged but in a different fashion but using the same mathematical types of models to do it.

world value versus a real world value.  The real world has people that are sick and need care and the virtual worlds and models make it appear that this risk factor doesn’t really exist if you will and we are given tons of statistics to drive you over to that type of belief.   So every day now we get some story with jaws dropping accountings on “how can this happen”..it’s the math and the subsequent algorithmic business models that do it.  You are sold one perception while in fact another real world crisis is taking place, so you get blinded.  Check out the 100 bottles of beer videos clip here and you can see why it end up maybe being 80 or 200 and in this model the numbers of bottles is like one or two.  In essence your care that you need is never going to be 100 bottles if you will, and this how it works today in the “modeled” business world.  This is the #1 Quant in the world, Paul Wilmott sharing some words of wisdom and if you want to see the entire video, it’s #2 in the footer.

So we have this issue and then let’s take a look at the priorities of CMS these days too.  Patient don’t have access to so many physicians and facilities who offer the care and help, so in view of all of this taking place, we have this oxymoron mentality of having to create 5 star ratings for hospitals.  See the link below, so does this make any sense at all?  Just one more case of “The Grays” at CMS I might say with some strange perceptions on what they think is relative today and this is not it, but as long as they believe it is, well not much gets done back over at the real worlds as this rating system they are working on is nothing more than some virtual values to dish out.

I should maybe say here too that these algorithms have no political ties either, it’s math for profit; however insurers will tend to go in the direction of lawmakers to where they can lobby and present a marketing type of situation to where they “think” they have the entire picture when in fact they don’t and are also hanging in “The Grays”…as that’s the plan, keep this complicated, just they do on Wall Street and you keep hearing that over and over in the last couple of weeks since the release of the book, “Flash Boys”..same principles for profit here.

I know how this works with profits and I’m not picking on insurers making a profit but does it have to be “that big” to where business models used are presenting this type of end result?  I guess we are somewhat reach a crossroads here on where do ethics come into play with making money?  From what is materializing in the news,  it appears that money has the top billing for now at least.  Below is a link written by a former Wall Street Quant who understand and share some of this with us and it’s important as she’s telling us to be a skeptic when we need to be and Cathy is also video #3 in the footer of this blog too, way back used to write models for Larry Summers and bonus points at the end for a couple of comments on her history there.   I have a few more links and videos at the Algo Duping page too that discusses both how you get duped and the end result of bite of the Killer Algorithms as they occur.  BD

A New York woman suffering from a neurological disease that has required four brain surgeries has been dropped by all of her doctors and denied medications due to her Obamacare plan.

"I've been vomiting. I lost 22 pounds. The pain is unbearable," said Margaret Figueroa, 49, on Wednesday.  "My medication helps me function during the day."

Figueroa suffers from a disease known as Arnold Chiari Malformation and Syringomyelia. Even though the Obamacare plan she purchased assured her that she was covered, her insurance card was denied when she went to fill her prescriptions. Then she learned that none of her doctors accept her Obamacare plan. Figueroa says she cannot find a doctor who accepts her Obamacare plan; indeed, there are only six doctors in all of Staten Island who take her plan, none of whom she's been able to get appointments with.

Obamacare's narrow networks have also shut out access to top cancer centers. The Associated Press says just 4 of 19 nationally recognized comprehensive cancer centers offer Obamacare access through all insurance plans in their state Obamacare exchanges, and a McKinsey and Co. study revealed 38% of all Obamacare plans only allow patients to pick from just 30% of the largest 20 hospitals in their areas.