Well this was probably not unexpected as where do you not have some folks trying to cheat and raise money for something that can’t exist.  Here’s a company with a a million dollar campaign for a calorie counting watch.  Is is real or is it Memorex as the old commercial used to say.  So far Indiegogo has not responded to addressing the red flags on this project and I included one of the videos below.  Problem today is that we do 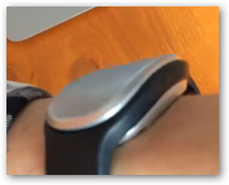 have some apps and devices that are ground breaking but those seem to be a bit more respectable than just producing a “proof of concept” as we have here.  Heck if you read around my blog enough then you know I come out and dispute value of apps and some devices all the time and not so much on whether it can really work or not but more so on the “value” the app or devices creates and if the data has the potential to used “out of context” to sell and make money, as well as some data sellers out there too that work it.

Here’s one that came out of MIT that I thought was odd a few months ago.  There’s always going to be a lot of trial and error and sometimes just be accident there are instances where some neat technology does develop either on it’s own or it ends up being bought or acquired as a portion of something that goes into a much larger development process.

This is a lot of what you can expect to see at the accelerator programs and again we go back to looking beyond a “proof of concept” to where it is nice to have the technology duplicated, in other words peer reviewed for authentication.  So if you were looking for this device to be your “food companion” with nutrition and dieting, well you might want to look elsewhere and see what else is out there.  There are companies that run into problems that have legitimate devices that also run into unexpected software projects, like the Scanadu.  There’s real legit time and individuals working on it and recently they found problems, so like no different than that implanted pacemaker you have right? (grin).  If you read the few paragraphs from the article folks were left on the hook for $400,000 with another project.  Scanadu starting shipping their product and then had to stop.

Here’s the Helbe GoBe video…and look almost a million raised.  A couple refund requests and folks asking for a response to the Pando article below basically stating this could smell of fraud.

Now that you watched the other video on the scam here’s a Scanadu video..no comparison and the Scanadu will also need FDA approval which they plan to pursue with a couple of trials as well.

I’m not so worried about the calculation processes of their algorithm apps but more about what the physicist had to say about the spectrometer size the the fact that they don’t think it can be this small and the other item from Tellspec has a couple big name legit folks behind it but still there’s no working model yet.  BD

For the past couple of weeks Pando has been reporting on Healbe — a near-$1m campaign on Indiegogo for a calorie counting watch that doctors and scientists say can’t possibly work. Despite countless red flags, Indiegogo has refused to suspend the campaign.

Now Pando has learned that Healbe isn’t the first company to use Indiegogo to collect hundreds of thousands of dollars for an apparent medical miracle, only to be accused of misleading its backers. Less than six months ago, another company — Toronto-based TellSpec — closed a massive campaign but has already compromised many of its grand promises to revolutionize diet and nutrition, leaving Indiegogo users currently out of pocket to the tune of nearly $400,000. With that campaign, as with Healbe, Indiegogo has taken no action to protect its users.

Physicists called bull. Raman spectrometers are weak, big and expensive. To do this scan accurately you would need to be sending out a high density of wavelengths from the spectrometer, fueled by a high-powered source, not a tiny rechargeable battery as TellSpec claimed. It would be impossible, many people said, to miniaturize this so dramatically and to do so for a $250 price tag. That’s without taking into account that most experts suspected the technology would be useless in assessing the finer details of food texture and detecting small trace ingredients in low concentrations, like the food allergens it swore it could find.

Except it turned out the entire video was a fake. Bowing to pressure from online commenters who doubted that the scanner could work as described, TellSpec quietly added a disclaimer that ran over the first 25 seconds of the video.

“The device shown in this video is a 3D model representing the future industrial design of the TellSpec scanner,” it reads. This is “not a working device” and is being used “solely for the purposes of demonstration.”

Sunday, April 06, 2014
Medically Related , My Commentaries , Other Items of Interest