Home » My Commentaries » Other Items of Interest » Technology » Two Data Brokers Get Fined by the FTC For Non Compliance, One Gets Most All Of The Million Dollar Fine Reduced as They Could Not Afford To Pay By the Court, But If You Are A Consumer With Medical Bills You Go To Bankruptcy Court..

One heck of a deal is it not but if a consumer can’t pay medical bills they go all the way to bankruptcy. 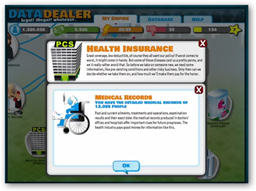 The one company fined a million gets is written off and down to $60,000.00.  What a rip!  They had flawed data out there which is becoming a huge problem all over the place due to the data selling epidemic.   How about a game of Data Dealer…this was made to exploit the epidemic…

“YOUR MISSION”
Become a data dealer and get all the dirty details on your friends, neighbors and the rest of the world. Learn how to trick your users and make cash with their personal data!
1) Build your own data empire: Collect the best data delicacies from your underground sources and create companies and online ventures.
2) Turn data into cash: Collect millions of profiles...with sweepstakes, dating agencies, online personality tests and your own social web.
3) Every dirty detail counts: Turn your database into a money machine! Even the tiniest details could be worth their weight in gold.
4) Rise from small-time back room data dealer to become a mighty data mogul!”

InfoTrack, the one that received the big fine was providing inaccurate information 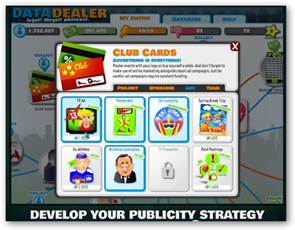 suggesting some were registered sex offenders.

You can go file a complaint at the FTC but we still don’t know who all the data sellers are and what they sell, need to begin licensing all data sellers which would include companies, banks, etc.  and provide a site where we can look up who they sell to and what kind of data they sell.  You can read the detail below but Checkmate didn’t even require users to identify themselves at all.

If it isn’t banks it’s the ad business we all work for anymore and of course there’s ties there to data selling and the ad business has to partner with the data brokers now too.  How darn important is all of this with behavior?

I think it’s gone too far and folks are stuck in virtual worlds and forget about the real world out there.  Advertising is out of control and again when I follow the Google suggestions on their analytics, doesn’t make one bit of difference on my Ad-sense at all, just an algorithm doing something.  After a Google algorithm said I was real duck and suspended me and couldn’t even connect me on their own Blogger platform where I had been for 6 years, the credibility being sold here I feel has some pretty big error margins.

Here’s the latest to where we have this absolute burning mission to follow you to the store from your computer..nuts and over done.  I have no problem with tracking purchases as stores and online sites do that anyway, but the real world is out there suffering while this over rated virtual ad world exposure emphasis keeps growing. 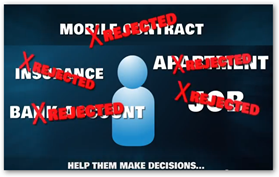 d the growing error rates are going to disappoint many I feel while the rich become wealthier.  Scroll down to the footer, watch some videos and see how Wall Street does it with math models and formulas, same thing here just different data that makes money out of thin air.

Here’s a report from the World Privacy Forum worth reading, a guy loses a job because his Klout score was too low? Junk science continues to grow.  In the report FICO said all it needs is a name and address anymore and they can “score” you on their medication compliance program which I wrote about a while back here.   They use sources that are not HIPAA partners and they can mine and score you to death and apply any kind of context they desire.

This fact is what lead me to write about Patient Activation Scoring as what about this getting combined with your FICO Medication Score…the data story told could get very ugly and out of context.  This is what they do with data selling is requery and match the data and resell you again and again.  BD

Two data brokers have agreed to settle Federal Trade Commission charges that they violated the Fair Credit Reporting Act (FCRA) by providing reports about consumers to users such as prospective employers and landlords without taking reasonable steps to make sure that they were accurate, or without making sure their users had a permissible reason to have them.

In separate cases, the two companies – Instant Checkmate, Inc., and InfoTrack Information Services – have agreed to pay civil penalties and will be prohibited from continuing their alleged illegal practices.

Instant Checkmate and InfoTrack sell public record information about consumers. According to the FTC’s complaints, both companies operated as consumer reporting agencies under the law but failed to abide by the FCRA. The FTC charged, among other things, that in many instances InfoTrack provided inaccurate information suggesting that job applicants potentially were registered sex offenders, possibly causing employers to reject their job application. According to the complaint against Instant Checkmate, that company failed to require that users of its reports identify themselves or certify the purpose for which they were seeking consumers’ information.

According to the FTC’s complaint, InfoTrack and its owner, Steve Kaplan, violated the FCRA by failing to use reasonable procedures to assure maximum possible accuracy of consumer report information obtained from sex offender registry records; failing to provide FCRA-required notices; and failing to provide written notices to consumers of the fact that InfoTrack reported public record information to prospective employers, when that information was likely to adversely affect consumers’ ability to obtain employment.

Monday, April 14, 2014
My Commentaries , Other Items of Interest , Technology