When it gets down to the bottom of the barrel, Prime Healthcare that was once considered the “dreaded last option” is now becoming a welcome offer in some states as they don’t have any or many other options. P

rime Healthcare is located in Ontario, California and made big news a few years ago buying several California hospitals.  I watched the one local hospital to me here turn from a very busy medical center to one where you can roll bowling balls in the parking lot.  The reason for this was the fact that is that Prime comes in and looks at what makes money and what doesn’t.  What makes money, Emergency Rooms so those become Cadillacs.  Other departments get reduced or go away.  Here’s a few archive links for a quick review of the past in California as they are always in the news in form or another.

There was also this big privacy violation case but the seem to have 9 lives plus and plow through whatever comes their way as again the alternative is not something most want in closing up shop.  Sometimes in their bidding processes they are the only hospital operator that bids on some of the “desperate hospitals” and Prime is for profit and does bit on acquiring non profit hospitals.

Just recently Prime put $40 million into a non profit medical school project to develop a school in Colton, California.  Dr. Reddy grew up in rural India and thus there’s probably a lot of his motivation.  They operate 25 hospitals now in six states.   Recently I posted about “hospital inequality” and really nobody wants to write much about it but with so many rural hospitals closing, it’s one of those issues in the “real world” that uncomfortable to talk about and folks tend to run over to the “virtual world” for some news over there.  I call it “The Grays” where folks at times too can’t tell the difference between virtual and real world values.

Ignoring inequality with hospitals can’t be more visible that right at CMS too thinking a big 5 star hospital rating system carries a big load of importance.  It’s not hard to figure out today that those with the most money will end up floating to the top.  At one time when financials were not so dire with so many hospitals it might have some value but little today and they are still stuck on thinking we need this data?

I see that a lot out there as just because data becomes available it’s like the 10th brigade to have to run over and do something with it as a priority and you get told “this is big news” because the news tells you “it is big news”.  We just went through all of that with the MD Medicare Claim data and sure it was a media event, but did little or nothing for consumers even though the news said it was going to release your soul if you will:)  It makes you wonder about about how bad “The Grays” are when you see stuff like such that seem to leave common sense outside the door?

You see this and just kind of sit back and scratch your head as if I see this why can’t others?  Maybe I’m 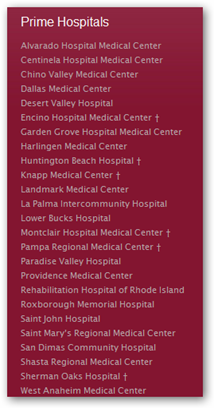 just way too logical and spend too much time in the “real world”:)  I learned that a long time ago not to get too caught up in virtual values as it happened to me a few times years ago but I got wise with age I guess and having been a former developer I see both sides as best I can and I’m not looking for more click bait as the poor papers are doing too with trying to increase their revenue streams with ad exposure, so add that element in there too as it is the real world too.

Back on topic here I read where Prime is putting the surgical DaVinci robot in 5 of it’s facilities too so it’s not all bare bones but again the focus on the ER is where dollars are as the company has made it a policy of not signing contracts with insurance companies but I think that may have changed a little in some areas with United,  Blue Cross and a few other contracts here in California.

In Michigan the state and county officials are making a case for Prime to buy Garden City Hospital.  The reason, to keep the door open.  Prime is committed to $35 million in capital to make improvements.  In Rhode Island with the Landmark Medical Center which Prime bought they are wondering about the provisions of the law and if the hospital will get a big tax bill.  In New Jersey St. Michaels hospital accepted a bid from Prime Healthcare to purchase the facility but will not take the debt from the hospital so taxpayers may be on the hook there.  It looks like it could be either take the offer or close down.  Prime has made the commitment to keep the hospital running for 5 years and then who knows what, it could be sold again, but at this point it is a 5 year life line.  Other bidders were higher but their intent was to buy it and close the hospital.

So again sometimes the choices are not the best but when faced with either 5 years or close up, five years starts looking pretty good.  Again many small rural hospital in the US have closed due to lack of money, Georgia is one state that has been hit quite hard there.   For those where Prime didn’t show up, many have closed.  BD