Home » Insurance » Medically Related » Medicare Advantage Insurers Are Going to Get a Small 0.4% Raise Now Instead of A Cut- Will The Fired Advantage Care Doctors Be Hired Back Now?

Medicare Advantage Insurers Are Going to Get a Small 0.4% Raise Now Instead of A Cut- Will The Fired Advantage Care Doctors Be Hired Back Now?

About 30% of all Medicare recipients now participate in a Medicare Advantage plan.  CMS said they reconsidered the change as the Medicare growth rate has  increased.  Well they did the same 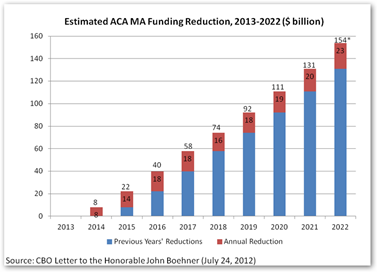 thing last year.  For a few years back, CMS discovered they had over paid insurers and of course are trying to get some of that back, well good luck now.

Last year insurers received a 3.3 raise and this increase is smaller but better than a decrease.  The raise is only .4 percent.  Funny last year CMS figured the SGR would be fixed and authorized the larger increase based on that anticipation and we know that didn’t happen.  In addition CMS changed some risk assessment procedures that had been required for very sick patients.  Here’s the lawsuit filed against United in Connecticut and you can see where other medical boards joined in the suit too.

Here in California I am hearing more and more from doctors that United pays them less than Medicare.  Look at this chart and we know 2013 has no cuts but look at the model, it’s nuts…ACA is not funding in this manor to save money.  I think all these savings were way over done over the last few years as they are not there.  We used to hear insurers purposely put out press releases on some guy’s brain storm and nonsense junk science “that a trillion could be saved” and boy everyone on Twitter just used to eat that up.  It ran it’s course and everyone knows now those type of projections are not real, just someone with a math model that crunched some numbers.  Watch video #1 in the footer for more on how that works…pretty entertaining too.

Here’s another odd instance with coverage as United bids and wins a Medicare Advantage contract for retirees for a county in Maryland and then found out they didn’t have any doctors in network in that area, so the county had to rescind their contract…darn algorithms in healthcare, United’s algorithms on the left had no idea what the ones on the right were doing here.  BD

The Obama administration on Monday rolled back some of the more controversial cuts proposed for privately managed Medicare health plans used by the elderly following pressure from insurance companies and lawmakers.

The Centers for Medicare and Medicaid Services said that on average, reimbursement for such Medicare Advantage plans in 2015 would rise 0.4 percent, reversing what is said was a 1.9 percent average reduction proposed in February.

The agency said that costs for Medicare health services have continued to drop, and that it now expected a decline in spending per member of 3.4 percent versus the 1.9 percent on which it initially based its 2015 payments.

Other changes to the payment formula included removing a requirement that insurers perform a costly overhaul of the way they assess the risk from their sickest members. It also made changes to other risk adjustment parameters to account for relatively better health among U.S. baby boomers, a move that will benefit insurers, although some will be helped more than others based on the regions they serve.