Home » Medically Related » Other Items of Interest » Technology » Meaningful Use Not Connected To Quality of Care by Doctors, Harvard Study Shows Little Significance

Meaningful Use Not Connected To Quality of Care by Doctors, Harvard Study Shows Little Significance

I don’t this is a huge surprise here.  Take into account though that there may be doctors using electronic records but are not in the meaningful use program, in other words not using a certified program.  I say that as we really don’t know and not to assume that all the non meaningful use doctors are using paper as I’m sure it could be a mix. 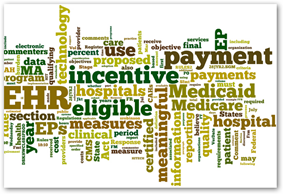 doctors who are unhappy with their EMRs.  I guess you could say with all the layers of software platforms it became a bit too cumbersome with some of them.

Diabetes and hypertension were managed better but again just having the documentation and history in front of you with a medical record will help that along, meaningful user or not.  I know that as I wrote an EMR in the early days.  There is still no comparison or reason to ever tout paper again by all means but I think the message here states we might be reaching a tipping point with asking how far do we go?  The fact that there’s a stage 3 lingering out there for the future is still up for discussion as I see the ONC office themselves just buried with complexities and now with CCHIT out of the business, this somewhat indicates there’s not as much money or they don’t want additional legal exposure or both in there.

Core measures are good to keep track of but now like everything else out there when do you draw the line and of course there will always be changes as healthcare is changing daily.  I thought this “Patient Activation Scoring” was a little out there so I asked a second opinion of a contact over at the NISS, and I got the same thing back as I thought.  The NiSS works to replicate models so we know if they have value or not. The next question is are they going to roll this into Meaningful use too?  It’s subjective from the doctor and then the next turn is to score how well the doctor are scoring when in fact a subjective  note in the chart would be better than a number?  Can you just hear the doctor saying “don’t schedule more than one or two 3 or 4 s today as my schedule is tight and those appointments require more time.  Obviously doctors should be doing this anyway and they have for years with educating patients.

So with this, doctors now have a “score” to meet or a goal of a “number” instead of just doing their job, kind of silly.  You can even get nuttier and put faith in a non linear FICO medication adherence program that says all it needs is a name and address to tell how medication compliant a patient will be..so what..add this in here too..a mistake as too non linear and there’s no model to replicate with their proprietary formula.  So having these two items work their way in as something to measure, huge disaster and big error factors invade clinical data.

This video makes a point as there’s always something from the “real” world that intersects here with flat out “scoring” and we need to adjust for that and thus it knocks this type of scoring to be irrelevant with Meaningful Use.  As the example here shows you want an answer for 100 bottles of beer but your are going to get results for 80 or maybe 200 but never 100, so there lies the danger of trying to measure Patient Activation and have it be applicable for Meaningful Use.

So with complexities, many doctors are starting to give up and the AMA has put in a request to make it simpler as well and you can’t measure everything in the real world as you can in the virtual world.  Dr. Halamka at Harvard Medical also recently spoke on his blog about pursuing methodologies to make things simpler as well, he sees the complexities that have grown oh too well.  BD

For the most part, a new study says that the meaningful use of electronic health records as prescribed under the HER incentive program has no connected to improved care.

Researchers at Harvard Medical School and Brigham and Women's Hospital compared physician performance across seven Stage 1 quality measures for five chronic diseases between providers who demonstrated meaningful use of electronic health records and those who did not.