Obviously it was remodeled after the damage that occurred and now the ER is much larger as well.  This took a long time to repair and get back in working order.  There was a temporary emergency area a block down the road but it not able to take ambulances in.  180 patients were there for opening day.  BD

A striking sight appeared earlier this week outside the emergency room of NYU Langone Medical Center: an ambulance. Then another. And then many more. 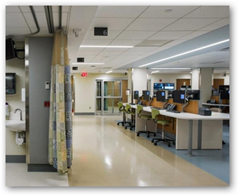 of stretchers throughout the day as if he was welcoming long-lost friends. Other doctors came around so they could witness it for themselves. The occasion was so moving that Dr. Steven Hofstetter, a surgeon, felt that one Yiddish expression for feeling pride was not enough. So he used two.

For NYU Langone, the expanded emergency room, now 22,000 square feet, also has social implications. Patient advocates had long accused the hospital of trying to keep away poor patients and sending them to Bellevue, its affiliated public hospital nearby.

While emergency rooms are not allowed to turn people away, “you can make it a very hostile environment, and they did,” Judy Wessler, a patient advocate, said this week.