Home » Insurance » Medically Related » My Commentaries » Technology » Secretary Sebelius at HHS Resigns, Wrong Person In Wrong Job For Too Long But What’s Coming Next? Does Replacement Sylvia Mathews Burwell Have A Hint of Some Data Mechanics Knowledge Outside of Economics?

What do I know..I did say back in 2009 when she was nominated that Health IT would eat her up, my fears and sadly it happened.  Nothing personal but saw the technology waters rising and knew this was no match as the Algo Duping would kick in and thus I came up with the name “Sebelius Syndrome”, mostly relating 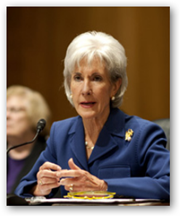 to all of her own public blunders and strange perceptions on technology, they were weird and strange statements that made no sense.  I used to get that a lot when I was writing software too with doctors so I knew what the routine was with non tech folks and their perceptions not being what the world of IT really is.

She didn’t have a good partner either with DeParle with connecting technologies to the verbiage of the healthcare law as the model was flawed.  Sebelius  got duped so much and there’s even more of that out there now, I write about it all the time.  I have a whole big post on that topic on who people can’t tell the difference between virtual and real world values anymore as marketing and those who soak you in with flawed models do it to make money.  We saw it it in the last couple of days with the CMS MD claim data where all got stuck on virtual values and that’s all they talked about, it was a media event.

This perception was one the strangest things that came out of her mouth, telling everyone to hurry up and she didn’t understand you can’t hurry up coding and development and I was not alone on this one.

Then we had the letter telling hospitals and doctors they were all lying on their billing..that was nuts as appeared to me as a panic threat as again when you don’t understand the mechanics of what’s going on around you with complex IT Infrastructures you may do things like this that everyone in technology just shakes their head and says “what’s up with that”.

There was the big moment on the Daily Show and geez I though why do this and make yourself more visible if you are on shaky ground to begin with.  It’s no secret on how Jon Stewart operates and we love him.

the White House is paying attention there now as well with hiring a former Microsoft Executive to run a big portion of the insurance exchanges.  Hire some Quants and get some decent modeling going so the government can keep up with the banks and insurers!  It’s beyond actuaries and you need some heavy duty python and financial “R” in there.

We get Sylvia Mathews Burwell now from the Bob Rubin School of economists next so we shall see what occurs there.  Every time I see Alan Greenspan mentioned or Larry Summers I think of how talented Bob Rubin as he ran those two around with getting them to buy in to everything he suggested.  She may have her own agenda.  Sylvia Mathews Burwell is the Director of the Office of Management and Budget (OMB). She was confirmed by the Senate on April 24, 2013.

One last commentary here… why in the hell does Congress stay in their current mode too.  I’m fair and they are just as bad with wicked and wild perceptions of things that just don’t exist the way they perceive it…so get that Office of Technology Assessment in place as a tool so I don’t have to hear any more Dr. Seuss  either.  Let’s get that bone head on track since we’re stuck with him for a while.  BD

Mr. Obama accepted Ms. Sebelius’s resignation this week, and on Friday morning he will nominate Sylvia Mathews Burwell, the director of the Office of Management and Budget, to replace her, officials said.

The president is hoping that Ms. Burwell, 48, a Harvard- and Oxford-educated West Virginia native with a background in economic policy, will bring an intense focus and management acumen to the department. The budget office, which she has overseen since April of last year, is deeply involved in developing and carrying out health care policy.

“The president wants to make sure we have a proven manager and relentless implementer in the job over there, which is why he is going to nominate Sylvia,” said Denis R. McDonough, the White House chief of staff.

But Ms. Sebelius has not been at the center of public attention in recent weeks. After the poor public performances, her national television exposure has been limited, but she has continued to make small appearances and has been active on Twitter to press for people to sign up for insurance. She submitted to another grilling before a Senate committee Thursday and later acknowledged that the idea of not doing “a hearing every three weeks sounds pretty good to me.”