I have said many times that PHRs come in all different flavors and here’s a new one, a box.  In addition you can read about the manufacturers representative that will taking care of orders in actual stores versus an online 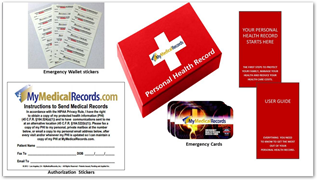 purchase.  If you have been reading here along for the last couple of years I try to keep all updated when events and things happen and MMRGlobal is a sponsor of the Medical Quack with a few links on the site as well as the flipping book under my sponsor section. Not too long ago an agreement was reached with Walgreens and at that time it was announced that Drugstore.com, a subsidiary of Walgreens would be selling the PHR, MyMedicalRecords.com online.  With this latest announcement we are going a bit further than just one website.  Also in recent news MMRGlobal announced an patent property settlement with Cerner.

This is called a “starter kit” and the press release information also says that we can anticipate seeing quite a bit more advertising using co-op funding.  $29.95 is the price for a six month starter kit and along with the online record storage system itself, you can see in the image that there’s a few more items that come along with it to include stickers and cards.  Not too long ago, Bob Lorsch shared his own story on how having his records on file saved him a ton of anguish when he was sick and had to go to the hospital, so yes he does use his own software.

CEO Bob Lorsch of Mymedicalrecords.Com Uses His Company PHR Software With Stored Records And Communication Capabilities To Avoid Surgery And In Turn Gets The Proper Treatment At Hospital… 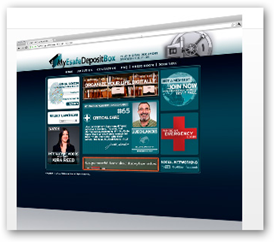 field with a patent allowance to provide sharing and storage of legal documents.  Much like the medical records sharing this will allow lawyers and clients to share their records back and forth securely.

“MMR plans on marketing its legal online records services and licensing of the new patent when issued through its MyEsafeDepositBox brand which is already designed to provide secure online access to important legal, financial, insurance and other vital documents, including a family's personal health information.”

LOS ANGELES, CA -- (Marketwired) -- 04/14/14 -- MyMedicalRecords, Inc., a wholly owned subsidiary of MMRGlobal, Inc., (OTCQB: MMRF) collectively ("MMR"), today announced the launch of its MyMedicalRecords Personal Health Record Kit going on sale in Drug Chains, Etailers and Retailers nationwide. MMR already has agreements in place and orders to sell the kit starting this quarter through Etailers and retailers representing more than 30 million customers nationwide. The program will be supported by a national syndicated television advertising campaign and millions of dollars in retailer co-op advertising funds, which are part of the Company's agreements with retailers.