He basically said stop making up stories:)  We do a lot of different news today and it’s not always the reporters fault as some papers now evaluate part of their job performance on how many “clicks” their news story gets.  This actually has nothing to do with the content but it’s rather about ad impressions and clicks as you 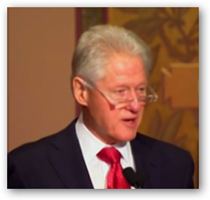 might be living under a rock to have not read about the declining revenue of news paper medias.  They are looking to replace what they have lost.  I think it’s a crying shame that all the cash rich companies don’t spent some serious money with papers.  Why, because news media moves their stocks and they need news feeds so what’s the deal here, starve off the media so the rest of us get left with “click bait” quality articles out there?  We appreciate good journalism as consumers and don’t want it to  go away.

Data stories are cheaper to produce as well and we are swimming in those too and I get tired of them with a bunch of the same thing with magpies quoting stats.  All those stories are not that way and we still do get quality hard news too and I don’t want that vanish, so papers need money.  If you are cash rich corporation, spend a little on the media, otherwise this is what we get, Clinton disgusted with all the “click bait” stories out there.  Bots are even used to write some of the news and the link below can tell you more about how that works.

We end up with some quantitated justifications for news articles for some stuff that is just not true..give them the word President Clinton:)  Watch video #1 in my footer “It’s all about Context” and you’ll get the story.  Again cash rich companies, think about what you are creating here and spend some money!  When I watched the CEO of Pepsi speak at one of the Davos videos, I don’t think she had a clue when she attacked the press at all.  You have to look at things in full circle today.  That’s what I try to do.  BD

When talking about healthcare today, let’s talk about all the Killer Algorithms that are making everyone miserable with not working together with government, insurers, etc.  That’s a lot of the issues out there today.  BD

Former President Bill Clinton on Wednesday jabbed the “political press” for its relentless pursuit of a particular “story line” regardless of reality, including when it comes to Obamacare.

Clinton made the remarks during a lengthy speech at his alma mater, Georgetown University, with his wife, former Secretary of State Hillary Clinton, in the audience.

“I think that it’s very important to understand we live in a time when, for a whole variety of reasons, policy-making tends to be dimly understood, often distrusted and disconnected from the consequences of the policies being implemented,” he said. “I have felt that most intensely in the development, the passage and the implementation of the Affordable Care Act.”

“We have newspapers that have people devoted to doing nothing but covering a campaign that doesn’t exist. So then they have to decide to create stories,” the former president told Fusion’s Jorge Ramos at the time.

Wednesday, April 30, 2014
Medically Related , My Commentaries , Other Items of Interest