few other press posts since that time and now we have a video, dialing for algorithms almost.

couple years ago that quietly went away and as you can see by today’s technology $10 Million was not near enough nor was it possible.  Granted information will be returned and some behavioral predictions may be found, but this is not a cure all.  Actually during the Blue Cross X-Prize fiasco, there was a $65 million dollar prize announced the following day for creating a solution to sterilize dogs and cats without surgery, a much more focused project with the rules spelled clearly.  I love dogs and cats myself but sat in amazement that they had a $65 M prize and as humans Blue Cross could only offer $10 million for solving healthcare solutions for humans.   WATCH THE VIDEO, ALL ABOUT THE ALGORITHM. 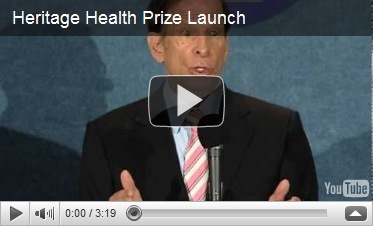 Notice the comment here, the prize is worth twice as much as the Nobel Prize for

Medicine, so what is the value of those algorithms, a lot.  Ask anyone on Wall Street about those Algo Men.  The former director of HHS has jumped right in there to make money too as you see him in the video.  These folks think analytics are the ultimate answer and granted we get smarter this way too and discover a lot, but like most in analytics, they are only looking at the dollar and amount and again what can they sell this algorithm for?  In healthcare today there’s always the double edge sword with a profit motive behind everything and it’s not real human caring like we have grown to know, that part I truly miss.

For a 3 million dollar prize the latest article says they have over 200 teams have inquired and also tout Harvard and Georgia Tech.  I think Harvard would have the capabilities to do this on their own, when you look at how carriers like Partners works closely with the FDA with their analytic information on medications.  Interest has also been coming in from India and China.

So it is SQL (structured query language) time here to write them up and automate with some action algorithms.  They will receive data that has been anonimized from patient files, but keep in mind there are companies that put data as such back together again and hopefully that will not occur and as a result of some 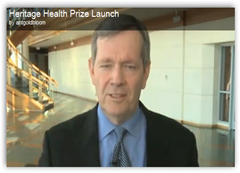 of this there could be some data for sale too.  No doubt the algorithm will more than likely be sold to recoup the $ 3 Million.  Again how close this comes will be interesting to follow to see if they can come up with maybe even a 20% factor to predict.

As having written code I find this interesting and see the emphasis and presentations made by people who have never written code, as it is entertaining to watch their focus.  As mentioned earlier knowledge will be gained but on how it ends up being applied and I doubt they will reach their ultimate goal as they express it with all the publicity and focus on the “save money” algorithm.  Some of this is already incorporated into other intelligence studies with healthcare so this is really nothing new, “just a pointed algorithmic focus” that basically leaves a very unsavory taste in one’s mouth when you watch and read all of this and it may border on what I call data addiction being the next 12 step program that could in fact require some real mental counseling as when we look at some of the current interpretations we see today.

There’s no doubt that talent is needed to use such information appropriately.  You also need patient participation and that continues to dwindle down with even less focus in this area as I have noticed in the last year or so.  When programs and implementations are made outside the areas

of true and realistic participation, those that create such programs can literally go mad to a degree with standing solid on those algos they created and without a substantial coding background of understanding how important implementation is, the non coder creators will defend those numbers to the grave, right, wrong or indifferent.  I find this as a good book of reference to remind us to keep in mind that we all need balance and stay with the accurate algorithms and not fall into a pit of rogue algorithms in the process as they are out there and sometimes it’s hard to tell the difference.

A $3m x-prize competition has been launched by the US Heritage Provider Network to develop a ‘breakthrough’ algorithm that can predict and prevent unnecessary hospitalizations.

The $3m prize, open to all comers, will be awarded to whoever can develop and prove a predictive algorithm able to identify patients at risk for hospital admissions. The prize is worth almost twice as much as the Nobel prize for medicine.

The intention of the open competition is to spur innovation in a similar fashion to the x-prize competition to develop a re-usable commercial space vehicle.