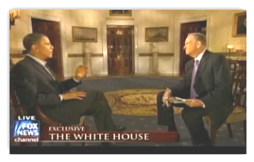 of the hatchet between Fox and the White House, or I kind of saw a little bit of that with the video.  First of all full credit and a thank you was given by Bill O’Reilly for the President and the State Department's help with helping journalists being held in Egypt.  That was the very first order of discussion.

The conversation and interview had some areas of humor too but healthcare had a big showing here.  The President is standing tough on his commitment to healthcare reform and he says he’s the same guy.  Job creation and education were also hot topics.  The President says the hardest part of the job is being in the bubble and one of the biggest adjustments for him.  He also says every decision that comes to his desk is something that has not been solved at lower levels and those are tough solutions to create and many are not perfect.  He even admits about being a bit more serious at times as even some of his comments could affect markets so in essence he is a bit guarded but still enjoys the job.  BD

doing this. And I must thank you on behalf of the FOX News Channel for

helping out Greg Palkot and Mr. Wiig who got roughed up in Cairo. That

was you, it was Robert Gibbs, and the State Department, who really saved

them — and we all thank you very much.

showed enormous courage, as so many journalists do around the world.

And so, not only was it important for us to make sure they were safe for

them and their families, but to uphold the basic principle of free

speech and freedom of the press. That’s a universal value we cared

about. And I know FOX cares about. So, I’m just glad these guys are –

O’REILLY: Those guys could have died.

O’REILLY: And I just want everybody to know that, you know, the State

The much anticipated encounter between the leader of the free world, President Obama and the highest rated cable news host, Fox News Channel titan Bill O’Reilly took place and no subject was off limits. For the first half of the interview, the conversation between Obama and O’Reilly was slightly contentious on the topics of Egypt and healthcare reform, yet in the second half of the interview O’Reilly encouraged Obama to be introspective and analyze what was the worst part about being President and how the office has changed him personally.