Home » Medically Related » Technology » E-Patient Wins Appeal And Receives His Data From the Medtronic CareLink System (Pacemakers) In Use At Stanford And Then Gets A Bill for Almost $800!

the implanted device data to electronic medical records using an HL-7 format.  We know Stanford uses Epic and back a couple years ago they were listed as being a connected medical record system.

The question is why did this uninsured patient get a huge bill like this as he just wanted his device data?  That was a pretty expensive script to give him access?  Here’s what he received…

So far he has not received an answer from Stanford…Here’s his speech at a TED X conference on the topic and he’s one trying to get all the data available on his health.   BD

Campos, who was recently given the blessing of Medtronic CEO Omar Ishrak to gain access to the data from his ICD in the form of an XML, wasn't too surprised when he received a bill for $192 for a physician visit to access his ICD data. The real blow came soon after when he received a hospital bill for a “Remote ICD Interrogation” to the tune of $605 – for a grand total expense of $797 for a two-page XML document detailing his device data.

Campos is uninsured since he has a preexisting condition (the same one that creates his need for the ICD) so the bill features no patient or insurance adjustments. A near $800 bill for an uninsured 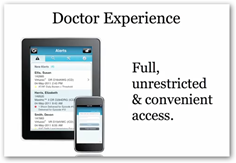 patient is not terribly surprising but consider that this is a bill for a non-invasive procedure that takes, in Campos' estimation, about five minutes. In fact, Campos says its a procedure that happens routinely when his physician wants to check up on him. It can even be done remotely using a box, connected to a phone line, that can send patient data from Campos' home to Stanford's CareLink cloud-based patient data system, which in turn is picked up by Medtronic's Paceart system at the hospital.

Due to Campos' outcry for his data, Medtronic recently installed a script into Stanford's Paceart system to cull Campos' data specifically and convert it into a XML file that can be opened in Excel or other spreadsheet software. More over the data is not in any form that is easily interpretable by a layman, so it's hard to imagine any fee for having the data interpreted or explained comes into play here.