I don’t know how he does it but every year Larry seems to top Larry.  He goes through a summary of what’s to come prior to each detailed speech that addresses in detail.  First he talks about the “Database In Memory” Option.  Loading data in memory makes queries go faster and we all like that.  He hit the right target with the focus on analytics today.  If you are not into business technologies and some of the advanced functionalities you might want to skip this one but on the other hand if you want to learn a bit give it try.

He describes row and column sorting together, no indexes.  Interesting as you can set the memory use capacity and updates also run faster.  No changes are needed for applications, no migration of data or restrictions on SQL and is cloud ready.

You wonder what went through the heads of Wall Street IT folks watching this.   The image below shows a very fast comparison for their algorithmic queries?  The good news is though that to outfit an exchange, the cost is huge:) 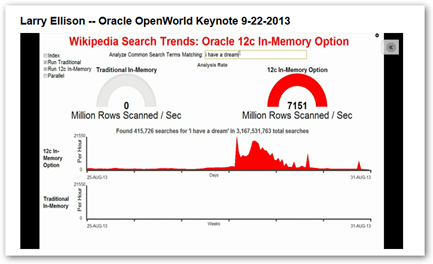 Oracle built a new machine to run all of this.  The Oracle m6-32 Memory Machine is on the market, 12 cores 96 threads, 32 terabytes of DRAM memory.  It moves around 3 terabytes per second.  He compares the machine to the best IBM has. 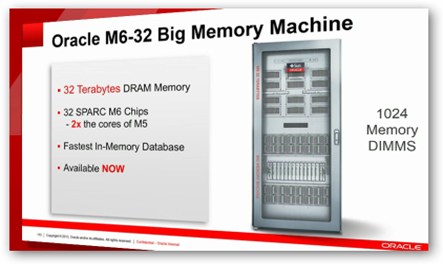 The demo 218 billions rows…those in life sciences running genomics research should be excited about this. 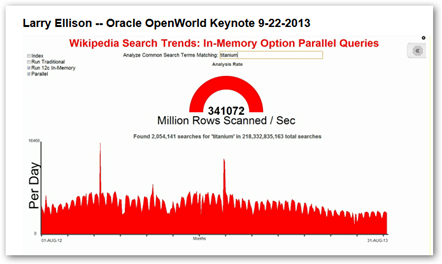 Last is the Oracle Database Back Up Appliance….made especially for data bases.  He talks about conventional back up procedures we all use and you lose data back to the time of the back up.  We all know that one.  The appliance “logs” so all the changes to the data base are there after the back up was made.  This is pretty amazing and a bit of a game changer there.  It works with very little load on the network and does not have to be in the same data center and can run in the cloud. Nice, recover to the exact last transaction.  It can back up any data base besides just Oracle.

My favorite of all was to watch Larry Ellison “unplugged” from AllThingsDigital, absolutely the best and entertaining.

Here’s the keynote from last year at the link below if you want to compare and see where things have progressed in a year.  Last year’s presentation had a bigger social networking focus along with applications.

Larry Ellison is the engineer as he states, he runs the software engineering at Oracle.  He had to split up his time this year between the America’s Cup which is going on at the same time as the conference.

At the end he takes on the “cheap” as he calls it with data centers running Linux with Intel chips on IBM stacks.  Extreme performance commands a little higher price as it will pay off in other ways, less electricity, less labor, one for updates does it all are some of the arguments for the “cheap” competition.  It’s interesting as later on in the program other Oracle partners present as they work with Oracle in other areas, like Intel and IBM.  Many become Oracle Partners when they bought Sun.  BD