Johnson and Johnson is about become one of the “evil” companies with the new device to replace anesthesiologists and you know what, their 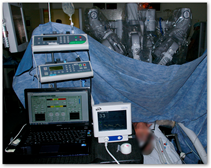 savings don’t amount to beans as far as the over all picture of what is spent on healthcare.  Back in 2008 I wrote about the McSleepy machine in Canada but it was attached to a cell phone for an anesthesiologist to monitor.

Here’s an image showing McSleepy and DaVinci together during surgery.  In the hospital in Canada they are not replacing the doctor but rather giving the anesthesiologist a better tool to use to monitor the sleeping drug, propofol.  What a contrast of what we have here with the big sale to replace the anesthesiologist with a robot.  This shows how cheap and mindless people are getting to save a few dollars.

Sometimes in real life the anesthesiologists run out and use their cell phones during surgery, heard that battle as surgeons created a huge fit over the anesthesiologist group working at the hospital doing that.  Surgeons complained over and over until the problem was fixed as again that leaves on less set of eyes and the surgeon has to watch the machine as well as operate.  So still even with the robot you’re  missing a set of eyes.

Sedasys is the name of the product that Johnson and Johnson will be marketing to hospitals and doctors are up in arms about it and for good reason, you need that extra set of eyes during a procedure.  And of course it will get pushed beyond low risk of course as what I read and see out there stuff is like this is going on all the time so why put it out there for a bean counter to justify to save money and why not sell it as a tool for the anesthesiologist.  A billion a year is what the 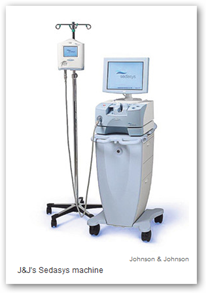 numbers said were spent on sedating patients for colonoscopies and the cost for the machine would be $150 versus $200 to $400 for a procedures, no thanks J and J I’m worth the extra money for that dollar amount.

I still remember the “wonderful marketing” on the knees too that was out there.  The machine was developed with help from Stanford and 1700 patients were sedated.  Ok but there were people monitoring the machine for the test as well.  J and J CEO said this (quote below).

“Sedasys "is a great way to improve care and reduce costs," J&J CEO Alex Gorsky said in an interview.”

I would think any hospital that has gone through any knee surgery suits might be a little cautious right now too as they don’t want anymore lawsuits.  So why not give the anesthesiologist  a tool, like they do in Canada?  Guess who’s behind some of this in the peanut gallery, Aetna watching as they tried to limit the use of anesthesiologists during routine colon cancer screenings to use only for high risk patients and I remember that pretty well as it created quite a fuss.  Patients who had Aetna and the doctors were fighting mad and fought it tooth and nail.  Nobody could believe they could make such a decision and be so cold.  You can see the chart below the bean counter case that Aetna tried to make.

Let’s not forget we have lived through knee surgeries and tons of recalls so the wave of trust might be kind of rough out there.  BD

Anesthesiologists, who are among the highest-paid physicians, have long fought people in health care who target their specialty to curb costs. Now the doctors are confronting a different kind of foe: machines.

A new system called Sedasys, made by Johnson & Johnson, JNJ -1.29% would automate the sedation of many patients undergoing colon-cancer screenings called colonoscopies. That could take anesthesiologists out of the room, eliminating a big source of income for the doctors. More than $1 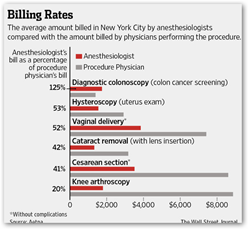 billion is spent each year sedating patients undergoing otherwise painful colonoscopies, according to a RAND Corp. study that J&J sponsored.

J&J hopes the potential savings from using Sedasys will appeal to hospitals and clinics and drive machine sales, which are set to begin early next year. Sedasys "is a great way to improve care and reduce costs," J&J CEO Alex Gorsky said in an interview.

Anesthesiologists' services usually cost more than the $200 to $400 generally charged by physicians performing the actual colon-cancer screenings, says health-plan CDPHP in New York state. An anesthesiologist's involvement typically adds $600 to $2,000 to the procedure's cost, according to a research letter published online by JAMA Internal Medicine in July.

J&J is also developing a device that could cut anesthesiologists out of another popular procedure: surgery to insert tubes into the ears of children seeking relief from infections. J&J hopes that ear, nose and throat doctors will be able to insert its device with the push of a button, avoiding having to put the kids under anesthesia in a hospital.

J&J says it will train doctors and nurses to use Sedasys, making sure that only appropriate patients are treated with the machine and an anesthesiologist or nurse anesthesist is on site.

To further protect patients, the company says it plans to introduce Sedasys slowly, in select hospitals and clinics starting early next year and in collaboration with anesthesiologists, nurse anesthesists and other doctors.