This was the way it looked in 2009 at the link below when they were looking for money that year. 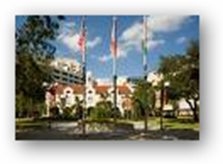 Jackson Memorial Hospital Begins Major Layoffs to Save Money–Around 1000 Expected and Some Can Return to Work as Part Time, Some Benefits (Video)

The SEC gave the hospital and the board a reprimand for not verifying their numbers before the bond sale took place.  After many years of financial struggling and this being the public health system a fine would have not really accomplished much.  BD

The board that governs Miami-Dade’s public hospital system, which is asking voters to approve an $830 million bond issue in November, misled investors about the system’s deteriorating finances before another bond sale in August 2009, the U.S. Securities and Exchange Commission announced Friday after a three-year investigation.

The SEC charged the Public Health Trust that governs Jackson Health System with relying on bad financial information provided by hospital employees, which the board then passed on to investors through disclosure documents before the sale of $83.3 million in bonds for capital improvements.

But while the SEC found that Jackson’s board failed its obligation to ensure the accuracy of the financial information, the agency stopped short of accusing individual trustees or administrators of intentionally causing the deception.

In a written statement announcing the findings, Eric Bustillo, director of the SEC’s Miami office, said Jackson’s board failed to provide oversight to prevent the misstatements and errors.

“The Public Health Trust fell short in its obligation to maintain adequate accounting systems and controls that ensure truthful disclosures to investors about its financial condition,” Bustillo said. “The Public Health Trust used stale numbers to calculate its revenue figures and lacked any reasonable basis for projecting losses that were far less than reality.”