It appears there’s some issues with the the pricing ad the query calculating the price consumers will pay is not working.  This is only in the 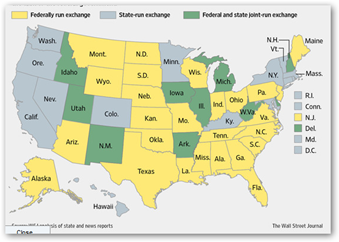 states where the Feds are running the exchange and does not affect the states that are doing their own exchanges, like California.  California also stated that due to consumer knowledge and other issues they only expect around 20% of the buyers to do the full automated run anyway so this is not the end of the world.

If not resolved on time then Serco is the contingency contract set up by HHS to fill in and again their services are to be used when a manual application is sent through anyway.  I remember many long nights trying to figure out what was happening with some of my queries and you work it until you get it.  Oregon is another state doing their own and he said a couple days ago that he expects to have to shut it down to fix it on around the 2nd day, smart IT folks working and know what to expect.

One thing for sure is that many are learning the short order code kitchen burned down years ago and it takes time on such projects, especially one this large, especially those who ran around not to long ago saying “hurry up Health IT”.  BD

Glitches in technology projects of this scale are "totally to be expected," said Michael Krigsman, an information-technology consultant who advises companies on IT projects. "On the surface, you'd think this is pretty easy for a website to give you a price, but behind the scenes, the number of variables is very high," he said.

Less than two weeks before the launch of insurance marketplaces created by the federal health overhaul, the government's software can't reliably determine how much people need to pay for coverage, according to insurance executives and people familiar with the program.

Government officials and insurers were scrambling to iron out the pricing quirks quickly, according to the people, to avoid alienating the initial wave of consumers.

A failure by consumers to sign up online in the hotly anticipated early days of the "exchanges" is worrisome to insurers, which are counting on enrollees for growth, and to the Obama administration, which made the exchanges a centerpiece of its sweeping health-care legislation.

Insurers are preparing to enroll potential customers through a variety of methods—online and offline—starting Oct. 1. "While there will no doubt be technical challenges, there are a number of pathways for a consumer to enroll, including through agents or brokers, and directly through health plans," said a WellPoint Inc. spokeswoman.