Well the money keeps rolling in for research at Wake Forest as they have not been as lucky in their medical records stating that the hospital states accounts for part of their operating losses.  They bring in a lot of revenue but

it seems to go just as well without profits and they blame Epic medical records as being a source, but anyway back on to the other side I have covered a lot about their research on producing organs and it’s been quite a while since they began producing and growing bladders.  At the end of 2012 Wake Forest announced forthcoming layoffs to be just under a thousand.  I guess one this this does show is that how disruptive medical records can be but it’s really all about the implementation. Here’s some of my back links on what Wake Forest..amazing stuff..

And for the male readers here, they have created rat and rabbit penises that work..more links below.. 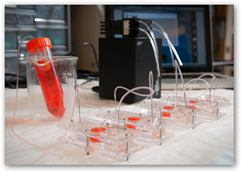 research even though the rest of the hospital struggle with money.  Up the east coast too you have Brigham and Women’s also involved in the same research.

You can see all the “mini”organs lined up in their containers to give feedback on various drugs.  Again I am still very anxious for the day when they print out kidneys for those needing transplants and they keep getting closer all the time with building the scaffold.

When they do print a kidney the information with a lot of drug reactions will be there to reference as well.  BD

Miniature human organs made by 3-D printing could create a "body on a chip" that enables better drug testing. That futuristic idea has become a new bioprinting project backed by $24 million from the U.S. Department of Defense.

The 2-inch "body on a chip" would represent a realistic testing ground for understanding how the human body might react to dangerous diseases, chemical warfare agents and new drugs intended to defend against biological or chemical attacks. Such technology could speed up drug development by replacing less-ideal animal testing or the simpler testing done on human cells in petri dishes — and perhaps save millions or even billions of dollars from being wasted on dead-end drug candidates that fail in human clinical trials.

Atala's group has pioneered 3-D printing methods that aim to build human organs with layer upon layer of cells. Their bioprinting methods lay down the cell layers along with artificial scaffolding to keep an organ's structure intact as it takes shape — a technique that has allowed the group to make tiny, less complex versions of full-size human organs.