Home » Medically Related » My Commentaries » Other Items of Interest » Technology » Jacob Reider To Lead the ONC Until New Leader Is Appointed–Visit His Page on Healthgrades Showing He’s Still Open For Business To See Patients, Along With Links to Dead Doctors, Some On Staff At Hospitals They Have Never Set Foot In And More…

Ok I just couldn’t help myself as we have had about 3 years worth of discussion on the web on how bad and old the data is on these sites.  You can read below about the doctor being at the ONC and two years at Allscripts prior to that.  How often does Healthgrades  update their information?  It’s just a site to expose you to advertising and selling data profiles.  Same erroneous stuff over at the other site Vitals that does the same thing…After seeing my tweet an MD said this:

“About 15% of the doctors Healthgrades lists in our area are deceased, some back to the 1990s. Many others are moved.” 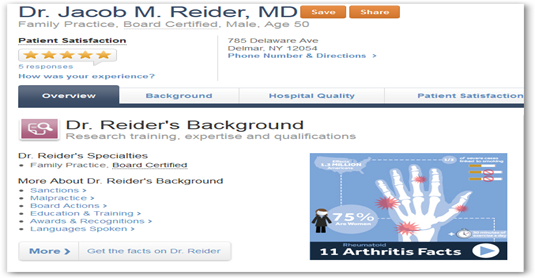 The site allows doctors to log in and fix what it out there about them, the same old routine with “free labor” that is now affecting consumers with all the flawed data out there about us…except we are really stuck on some of it because we can’t buy a house, get a car as the “flawed data” is seen my so many as being “accurate”.  It’s not.  If you visit the Algo Duping page you can see one of the videos that talks about this done by 60 minutes and another video that explains “Context is Everything” which is related to all of the data selling with the marketing and duping that goes on with a lot of the reports and studies you see.  Here’s how a lot of the “out of context” information you see on the web affects all of us as big companies, even to include NASA still don’t know where the value is in the data they collect, as demonstrated with a nice call out from this panel with the woman from T-Mobile..”what are we doing”.

I still see the “save trillions” reports out there and hint to the wise when you see that, nobody can predict numbers that large today with the world of flawed math models we have with complex algorithms that seek out other algorithms and change the presentation of the context we see.  Under looking further, the only awards here are the Healthgrades honor roll, nothing about the doctor’s service at the ONC.  How often do they look?  Amazing all the data sellers out there capture all of our data almost in real time and yet sites like this persist. 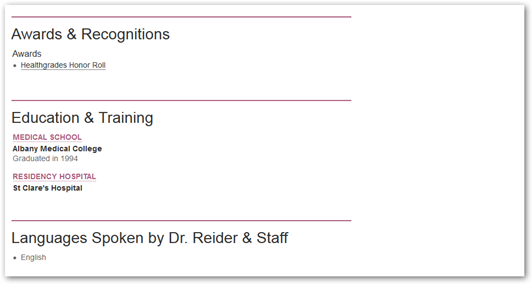 Might be some folks out there looking to find a family practice doctor, you think?  The doctor here is not an isolated case as back in February you could still get an appointment with Michael Jackson’s doctor too in Beverly Hills.

marketing to make some money, no concern for accuracy.  See they even say how good their marketing is…

Here’s a story from the AMA from 3 years ago and we talked about the “dead doctors” on these sites too..enjoyed this one…after I had found my former doctor who had been dead for 8 years still listed and seeing new patients.

Anyway this post was two fold here to cover the announcement at the ONC and at the same time to draw attention to the data selling effects we are all seeing out there and the impact it has on growing “flawed” data which nobody cares much about as long as the data scraping and mining keeps bringing the dollars in.  Healthgrades didn’t do much to give any background on the good doctor, did they?   BD

Two members of the senior management team at the Office of the National Coordinator for Health IT will temporarily take on top leadership positions next month as the Department of Health and Human Services continues its efforts to permanently fill the positions.

Jacob Reider, M.D. will serve as acting national coordinator until the post is permanently filled, Mostashari revealed in an e-mail to his staff. Reider had been serving as ONC's chief medical officer and previously was an ONC senior policy adviser. Reider's biography on ONC's site notes that he is "a family physician with 20 years of experience in health information technology and special interest in clinical innovation, user experience and clinical decision support."

Before joining ONC about two years ago, Reider was chief medical informatics officer at Allscripts, an electronic health records vendor.