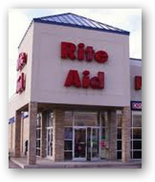 mass IT project being totally finished to handle all of it.  Now in those states where the Feds are running the show you can expect to see agents at Rite Aid stores.  They will be independent and not associated with the store but when a policy is sold, Rite Aid gets a small cut of the sale. There had to be some incentive for Rite Aid in all of this I suppose.

So when you get your flu shot or prescription there will be yet one person at your disposal in the pharmacy areas.  This will be interesting to see how this goes.  At one point in time it was discussed on the web that Walgreens would sell insurance, and that way long before we got closer to the insurance deadline here.  Rite Aid seems to be coming back from 2009 when they actually had to sell a few of their stores to Walgreens and in 2010 they closed their distribution center in Rome New York.  BD

HOBOKEN, N.J. (AP) -- One of the nation's largest drugstore chains has signed on to promote the implementation of the federal Affordable Care Act, pledging to have insurance agents on hand at its stores in 31 states and the District of Columbia to help consumers navigate the new system.

Standley said the agents would be available in 2,000 stores. Rite Aid has about 4,600 locations nationwide. He said they will be independent and not affiliated with insurers who are offering health insurance through newly created exchanges, but they will receive commissions if they sign people up for policies. Rite Aid also will receive a small commission for each policy sold, he said.

The agents will be in stores beginning Oct. 1 when the first open enrollment period for the health exchanges begins. The Congressional Budget Office has estimated that 7 million people currently uninsured will sign up for health insurance during the first six-month period.