In what Practice Fusion has they are there to provide value with electronic medical records but with the new funding some are starting to look at the “burn” rate with the money.   Many of the healthcare apps companies have also adapted the “data selling business model” and I wrote the other day questioning

what kind of an impact this has with VCs and how it could influence who gets funded and how are they run.  I gave a bit of a story about one of those companies and their marketing and how they interfaced with me in what I called a somewhat immature focus, other words what are they chasing and where’s their focus.  I get a lot of folks marketing me since I am a blogger and so much of it anymore is just flat out “cookie cutter” stuff where you can take the name out and it all starts looking the same and ZDnet wrote about this recently as well with basically the same opinion, boring.

With this funding this time a new board member for the company is announced and as we know those are supposed to be the folks that help companies with directions that lead to profits.  Just yesterday another medical records company, Greenway enjoyed a short ride as a public company for a little over a year and they did their IPO they stated as to raise $100 million.  Now Greenway is back to being a private company with a PE firm kind of bailing them out.  Greenway is the medical records that has the contract with Walgreens to use as their medical records throughout the US and they have a good size market share but it seems like money was still an issue from what I have read and thus the Private Equity Firm Vista came in and added them to their portfolio.

Greenway Becomes A Private Company Again As Merger With Vitera Healthcare, Owned By Vista Equity Partners Private Equity Is Approved by the Board

Again on the markets software companies have value but we all know Wall Street runs a  muck with inflating it to draw investors in stock.  Look at Facebook at what has happened their and frankly we have way too many out

there with value and without value trying to flip algorithms for profit with nothing tangible attached.  The link below discussed the “free and nearly free” digital world today and where some of the steroid marketing plays in here to dupe folks on inflated values or to at least question if some of that is the case.  Free does have a cost but you may not see it.

Practice Fusion uses Salesforce.com for their record storage and it’s interesting too to find our former US CIO working over there as well, which is not a bad thing at all as we all need to work somewhere.  He was also very close to the IT work in healthcare during his tenure with the government.

It was just last year, June of 2012 that Practice Fusion landed funding for $34 million so again time to look at the burn rate and what’s going on.  In 2012 the company launched a new technology to allow labs to connect to their system so there’s some be written here and even Dr. Oz has featured the company on his show with using the free medical records system, so being free is serving a purpose to allow some to have access to a software system is a good thing.  The company does offer a “paid” version to get rid of the ads that appear but most are using the “free” version across the US.

When you take a look at the big medical records companies as competition, they are not cheap and thus it is important that writing code and software development is not cheap out there today.  I wrote an EMR in the early days and as soon as all went to the web, I got out of the business as I could see it headed in a direction that was more than I wanted to handle as I could no longer be a sole developer.  The software also has a PHR and I won’t discuss that one today as we all know about the uphill battles with even getting consumers to look at one, I can attest for that being a big promoter of them with one of the largest sections on PHRs on the web since the beginning.  You can’t help but be inspired when you listen to the founder and his driving forces and what he sacrificed to start the company.

Like the rest of the medical record companies they are getting closer with insurance companies as all want the analytics today on every penny and as an example outside of this look at what Humana is doing with Eli Lilly to sell data and Practice Fusion relies on pharma for advertising revenue.

There’s a big push by United Healthcare to get members to pay online and if you look at this page from Practice Fusion, we have another attempt to get consumers to look at their spending with insurers as well, and Intuit tried this for years and connected to every insurance carrier and marketed like crazy but didn’t work and Quicken Health is being dissolved in July of this year, so the jury is out on consumers in this area for sure, like personal health records. 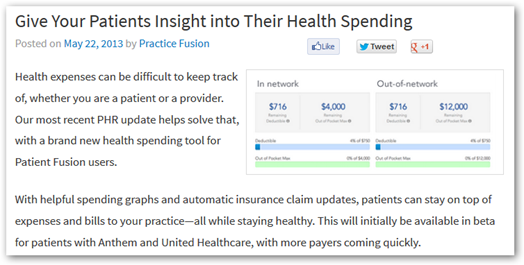 Again through all of this government and world is beginning to see how complex the world is today and business models are important as as I have said many times how many could stand on their own without selling data?  Practice Fusion has other income from advertising as well but again how long can the data selling model sustain itself and this really applies with all the consumer mHealth apps you see out there that mine and scrape your data.  BD

Today, the startup made it clear just how strong its growth has been over the past few years, announcing a whopping $70 million Series D investment, led by Kleiner Perkins Caufield & Byers (KPCB) and institutional investors OrbiMed Advisors and Deerfield Management Company. The startup’s existing investors, including Artis Ventures, Morgenthaler Ventures and Felicis Ventures also contributed to the round, which brings its total capital to $134 million.

The big question, of course, is just what this massive infusion of capital means for a company at this stage in the game. In a conversation this week, Practice Fusion founder and CEO Ryan Howard was unwilling to put a timeline on a potential IPO, but he did say that the company’s new $70 million would give it the capital it needs to head in that direction and that, looking forward, he has “every intent of taking [Practice Fusion] public.”

Today, more than four million patient visits are being managed on the startup’s platform, a number which has grown 75 percent year-over-year over the last 24-odd months. In turn, this has allowed Practice Fusion to expand its aspirations on the data front, increasing its de-identified data platform, which Howard claims is now the largest realtime clinical dataset in the U.S. Companies in the healthcare market, today, he says, are feeling the pressure of consolidation, which is why the team has been pulling all available levers to scale as quickly as possible.

As part of its $70 million infusion, for example, Beth Seidenberg, MD, a general partner at Kleiner Perkins, will be joining the startup’s board of directors. Thus far, although it operates in a world of old, traditional healthcare players, Practice Fusion has identified more as a technology company than a healthcare company, in the traditional sense.