for violating his patents, and he won big.  When I read this article I immediately thought of his prize contest for non surgical sterilization of animals.

Here’s my original post from 2008 which at the time I found it entertaining as it came the day after the Wellpoint/Blue Cross X-Prize  farce wanting to hand out $10 Million to solve healthcare and it doesn’t take a brain surgeon today to see how much of a farce it was, but I did back then and thought the $25 million prize as Dr. Michelson offered was great and he said himself $10 million was not enough to get people 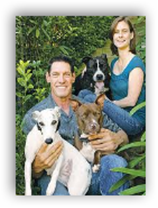 Now this story says they only do male dogs so far so that leaves female dogs and both sexes of cats still needing a solution.  If these folks are not a full on winner they deserve something at least for their progress in this fields.  It mentions that the dogs may still show aggressive behavior and such though and I had dogs that have been neutered too where that doesn’t go away, both male and female so there’s no perfect answer on that one and it works the same way for humans come to think of it:)

The video below gives more details on how this works, good stuff and as the article states, the male dogs can cosmetically still look like they have balls so we have that side addressed with our pets now:)  BD

A new non-surgical procedure to sterilize male dogs is gaining attention in the Inland Empire, but some say it may not offer the same benefits as surgical neutering.

CBS Los Angeles reports that the Humane Society of San Bernardino is the first place to offer the procedure called "Zeutering." It provides chemical sterilization to male dogs by injecting the chemical Zeuterin into their reproductive organs.

"The reason that we started using it here at the Humane Society and offering it to clients is for those clients who like the cosmetic appearance of an intact male dog," said Dr. Amy Raines.

The procedure is non-invasive, according to Dr. Raines, and dogs are lightly sedated but do not require general anesthesia. The procedure costs about the same as surgical neutering.

Wednesday, September 04, 2013
Medically Related , My Commentaries , Other Items of Interest