Home » Other Items of Interest » Technology » Larry Ellison Talks With Charlie Rose About Google, Privacy, the NSA and More, Reiterates That You Need To Worry More About What Data Private Industry Collects and Uses And Less About the Government

Larry Ellison Talks With Charlie Rose About Google, Privacy, the NSA and More, Reiterates That You Need To Worry More About What Data Private Industry Collects and Uses And Less About the Government

I don’t know how I missed this but it’s about a month old and great interview as Larry Ellison doesn’t give many of them.  My favorite though all was 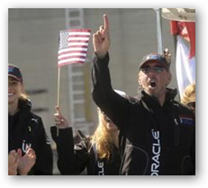 the one done by AllThingsDigital to where he loosened up and was fun..”Leo”…below is the link to his speech at Oracle OpenWorld, the one he made before the America’s Cup tore him away and he’s allowed of course and who wouldn’t in his shoes.

This interview he opens a little bit about the industry, his friends and his best friend Steve Jobs.  Larry Ellison is also the “genius” that he called Steve Jobs and he went for daily walks with him until the last couple of days when Steve Jobs said I’m with the medicine.  I didn’t know that until I heard it here.  He’s not kind about Google..and they have the ongoing lawsuit over stolen code and this is not like the monkey courts that Goldman Sachs has put on, they both know code and this is the real lawsuit.  Larry identifies the Larry Page as the brains at Google as committing the “evil” act.

“The Google Guys” as Larry refers to them and he says Larry runs the company.  He doesn’t call the company evil, just what Larry Page did.  This is an issue that really bothers Larry Ellison.  He says without Steve Jobs just watch the history with Apple.

On privacy, who would know better about choosing the government or private industry to worry about with data, they all use Oracle data bases and have for years.  He gives the example of American Express having just tons of information about you 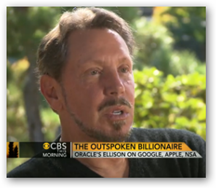 for one and they have been around long before NSA.  The whole issue of privacy fascinates him.

He says who ever heard of the government using information against you Larry asks?  Larry says if the NSA becomes political targeting tool, that would be area to have concern and he side steps a full statement and states more of it needs balance.

I harp on that all the time with being aware of what private industry is doing with your data and give one example after another about the data selling epidemic we have and here’s a Quant at the link below who says the same thing, where the consumer outrage as private industry can do more to judge or sink you than the government and they touch your life (like banks in in your home when you are online)all the time and again the data is much richer.  Insurance companies are buying this 30 year record of data all about you from the banks…

People that work with data know this stuff and try to educate and there’s a lot bigger voices than mine that keep speaking out..visit the Algo Duping page for some great videos that will cue you in as to when you need to be a skeptic.