You can read the announcement below.  I know there are folks that really have serious problems but again do you want the machine you put on your fact at night or maybe this?  I’m sure this implanted system will carry a good size cost as well.

Minneapolis, Minn. – May 1, 2014 / PRNewswire / — Inspire Medical Systems, Inc. announced today that the U.S. Food and Drug Administration (FDA) has approved Inspire Upper Airway Stimulation (UAS) therapy for use in a subset of patients with moderate to severe Obstructive Sleep Apnea (OSA) who are unable to use Continuous Positive Airway Pressure (CPAP). Inspire therapy is a fully implanted neurostimulation device, the first of its kind for sleep apnea, that provides an alternative treatment that is proven, convenient and easy to use.

Obstructive Sleep Apnea is a prevalent health issue affecting about 18 million Americans, according to the National Sleep Foundation. Research shows that an individual with poorly managed OSA is at increased risk for heart attack, stroke, 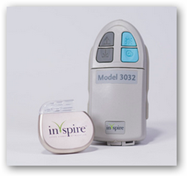 Current treatments for OSA include weight loss, CPAP, oral appliances and anatomy altering surgeries. CPAP is the current standard of care for OSA management. It is often successful but recent studies have shown that roughly half of all patients that start CPAP do not continue to consistently use it.

Patients implanted with Inspire therapy who participated in the company’s STAR (Stimulation Therapy for Apnea Reduction) pivotal clinical trial experienced a 68 percent reduction in apnea events, a 70 percent reduction in oxygen desaturation events, and significant improvements in daytime functioning as measured by two validated questionnaires. These results were published in the January 9, 2014 issue of the New England Journal of Medicine.

Inspire therapy will be commercially available to patients in the United States in the second half of 2014.