This was a great video that explains where we have been and where we are going with “treating the patient” and not the tumor.  Of course the tumor is still the target but with immunotherapy we are harnessing our own systems to fight cancer. 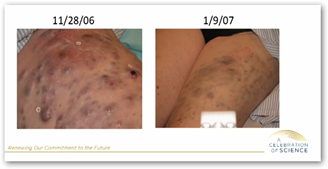 Through the studies Dr. Wolchok talks about we get some really good insight here on how some of this works, how it works with different people and very important “the feedback from the patient”.

When you listen to the description of the one visit the doctor had with a patient after looking at the images and other clinical data, you can hear him state that he’s about ready to deliver some “not so good” news, and then the patient surprises him and says “I’m feeling better”.  It was a eye opener the doctor himself was not expecting, and in essence a good thing as the feedback created more research into “why is he feeling better”.   In matter of 8 weeks everything had pretty much regressed and it’s been that way for over 6 years, amazing.

The video is done to where the layman can understand it and that’s what I try to focus on here with posts and videos.  It’s rather long but well worth watching.  The video was from 2012 and hats off to American Scientific (source) for digging it up.

It was interesting to see with melanoma that pigments were still left even though the cancer was gone as to the eye you would have thought that the cancer was still there.  The study of tumors really changed in the fact that sometimes they do grow before they regress so now this is a potential process that may occur during treatment, but everyone is different.  BD

One of the investigators studying this particular approach is Jedd Wolchok of Memorial Sloan Kettering Cancer Center in New York City, who has written “Cancer’s Off Switch,” a feature article in the May issue of Scientific American. In perhaps the most startling part of his extraordinary report he wrote, “I believe it is finally time to start thinking realistically about long-term remissions, even cures, because we can now combine standard therapies that target the tumor with immunotherapies that boost a patient’s own defenses.”