The FDA approved the spinal device in 2010.  The number of devices recalled can be found here.

In addition there’s a pretty striking lawsuit if what is alleged is true with another product, the CerviCore disc  not being made with titanium but rather a combination of other metals and Stryker it sounds like, lied about the content.  Well as time marched on the metal pin has either broken in some instances or deteriorated to where metal toxicity in being found in patients.

Investigations are going back to clinical trial patients to follow up as well.  BD

The product was tested on various subjects enrolled in a clinical trial in the years prior to 2010, when FDA approval was granted and Stryker began distributing the devices starting on April 23, 2010. Less than three years later, an Urgent Medical Device Recall was announced.
According to documents, a pin connecting the tulip head to the plate body can be subject to fracture, posing a 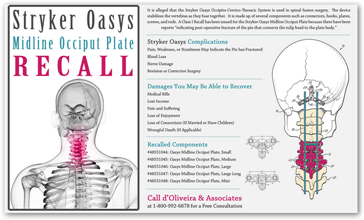 risk for blood loss, injury to the nerve and metallosis.

The latter is the migration of toxic ions to the blood from minute particles rubbing away from metallic objects.
According to the lawsuit, Stryker is alleged to have claimed originally that CerviCore was fashioned exclusively from titanium. However, the complaint alleges that Stryker later admitted its medical device contained a combination of cobalt, chromium, molybdenum, titanium and nickel.

Before the Stryker recall, the medical device manufacturer originally touted the OASYS system as a breakthrough alternative to traditional methods of treatment. But it didn’t last. On May 30th of last year, Stryker issued an Urgent Medical Device Recall, advising hospitals and other health care facilities to scan inventories for recalled lots and halt their use.

Three weeks later Stryker was back, advising surgeons having previously used the OASYS Midline plate to implement routine evaluations of affected patients.
The FDA also became involved, and to that end Stryker and the FDA issued a Class 1 Recall of the OASYS Midline Occiput Plate. A Class 1 recall is the most serious recall classification maintained by the FDA.