Home » Medically Related » Other Items of Interest » Technology » Cell Phone Privacy Tracking, Even If Your Location Tracking Is Turned Off Matching Data Can Still Occur With App Data Comparisons That Use Sensors Such As Accelerometers And More- Something Else To Be Aware Of With mHealth And Other Mobile Apps…

This article talks about tracking via apps working with accelerometers and the fact that it is something that was not thought of with phone manufacturing in essence.  It gives a good visual example of “fingerprints” 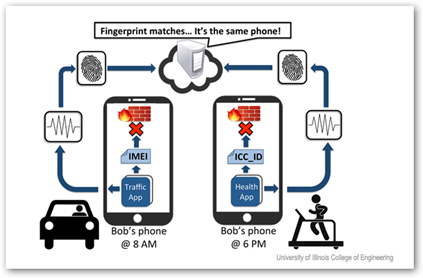 left on phones and how if the accelerometer and the data with the apps is compared you can still be tracked.  The visual shows how this would work with a fingerprint.

It comes back to the unique characteristics of each cell phone that can be used to identify it as the sensor data is combined, so your activities can be tracked.  For this article, they focused on the accelerometer but felt the same could be done with camera apps, microphones pressure sensors and more.  It would not require high skills of expertise to tap in and all that would be needed is a little knowledge of computer science.  There’s nothing governing in the way of laws here either so just the MIN (mobile identification number) could end up being the gateway.

In their works, they tried some efforts to disguise this and could not find a way to wipe sensor data and there was a risk there too in not wiping it all as the app would cease to function.  It appears the next level here is to find a way to eliminate the data finger prints and this goes back to how phones are manufactured.  In the picture you can see a health app as one area of input here and again there have been all kinds of discussions here too on privacy at that level outside of this new finding.  I am guessing too that even money transaction apps would fall in here as well to help track you, i.e. where you were when you made a purchase, etc.  All of this of course is a real concern due to the “data selling epidemic” that we have in the US.  If the data wasn’t worth anything, well who would bother.  This looks like yet another issue that could end up in Congress for discussion at some point as well as going back to the phone manufacturers to work on this one.

This seems to again affect every area of the cell phone as we know it today with sensors that apps use to give us information and if the process of being able to combine it is simple enough well we won’t be able to hide anywhere, even if the phone is off.  I would guess now that this has been released someone will dive in there as well to see what they could access and identify.  This might also give the World Privacy Forum who just released a report on yet one more area research as well.  Once data like this were accessed, of course the next step would be to sell it and make money.  BD

Researchers at the University of Illinois’ College of Engineering have discovered that, due to imperfections in manufacturing processes, cell phone sensors have unique characteristics that can be used to identify the phone.

If, for example, you’re driving  to the gym and use your phone to access check on traffic, that app reads data from the phone’s accelerometer.  When you arrive at the gym, data from the accelerometer is also used by an application on the treadmill that measures your gait and distance traveled.  If those two transmissions of accelerometer sensor data are compared, an analyst can determine that they came from the same phone.

While the researchers at the University of Illinois focused on accelerometer data, they say there’s no reason to believe other sensors in phones – gyroscopes, microphones, proximity sensors, pressure sensors, cameras, etc. – don’t leave similar fingerprints.  So the potential is there to link, identify and track an incredible amount of activity.

What’s more, says principal researcher Nuripam Roy, the degree of expertise required to tap into this data is not very high.

That’s especially true since laws and regulations haven’t kept up with the technologies. “There is no regulation, no need to get permission to approach this kind of data,” Roy said.  “What we have shown is that this apparently benign-looking data can be as good as sharing the MIN [mobile identification number] number of a phone.”

In the meantime, he said, manufacturers – and governments that regulate them – may want to consider the implications.  “We think that these idiosyncrasies in the sensors are coming from the factory production line,” Roy said.  “It may be that there will be more concern about those processes.”

Tuesday, May 13, 2014
Medically Related , Other Items of Interest , Technology