Thanks to Dr. Crounse for previewing some of this at the HUG meeting in Redmond recently, we

have already had a preview of how some of this new technology works with healthcare, like folding proteins on Surface for example.

More can be read here with videos to watch and download.  Follow the links on the pictures to the MSDN HealthBlog on MSDN.

There’s even a bigger version of Surface coming to the world of radiology in the works as well.   BD

CAMBRIDGE, Mass.--Microsoft Chief Research and Strategy Officer Craig Mundie on Thursday offered a long-term view of where Microsoft and the world of computing are heading over the next few decades. Speaking at the MIT Emerging Technology Conference here, Mundie envisioned a 3D virtual world populated by virtual presences, using a combination of client and cloud services. He called this next generation "spatial computing" and listed numerous attributes: many-core processors; parallel programming; seamlessly connected and fully productive; context-aware and model-based; personalized, humanistic, and adaptive; 3D and immersive; and utilizing speech, vision and gestures.

Also, below are some ways pulmonary and cardiologists might use the technology to get inside a heart, zooming

right in on the aorta of the heart.

You may also want to read up on the Common User Interface, another project in the works from Microsoft to one day provide the same user interface at potentially every health care facility, good news about this, only one interface to learn and use everywhere throughout the healthcare system.  Below is a video I made doing a “hands on” trial run from the demo on the web site showing Silverlight technology with electronic medical records.  BD 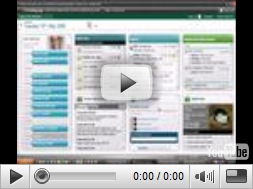