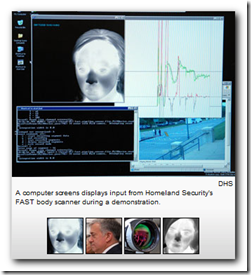 You know on second thought we could have used this on Wall Street recently, you think and with a little re-programming and different settings, why not have one in the White House and in Congress?  (grin)  We all want to know what they are thinking.

One branch of government is so advanced and yet when it comes to those at the top in other areas, we are so deprived.   BD

Baggage searches are SOOOOOO early-21st century. Homeland Security is now testing the next generation of security screening — a body scanner that can read your mind.  While FAST's batting average is classified, Undersecretary for Science and Technology Adm. Jay Cohen declared the experiment a "home run."

Most preventive screening looks for explosives or metals that pose a threat. But a new system called MALINTENT turns the old school approach on its head. This Orwellian-sounding machine detects the person — not the device — set to wreak havoc and terror.

MALINTENT, the brainchild of the cutting-edge Human Factors division in Homeland Security's directorate for Science and Technology, searches your body for non-verbal cues that predict whether you mean harm to your fellow passengers.

It has a series of sensors and imagers that read your body temperature, heart rate and respiration for unconscious tells invisible to the naked eye — signals terrorists and criminals may display in advance of an attack.

But this is no polygraph test. Subjects do not get hooked up or strapped down for a careful reading; those sensors do all the work without any actual physical contact. It's like an X-ray for bad intentions.

Currently, all the sensors and equipment are packaged inside a mobile screening laboratory about the size of a trailer or large truck bed, and just last week, Homeland Security put it to a field test in Maryland, scanning 144 mostly unwitting human subjects.