We live in the world of transparency today and that company that you bought stock in 10 years ago, may not be the same company practicing 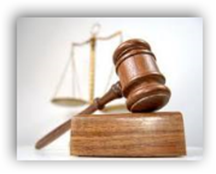 it’s methodologies for generating those dividends that all investors like to receive.  As judges I think this is an area to keep on top of, after all they have the authority to make some very powerful decisions, so read up and come out of the dark ages and see where the companies you invest in are going and what they are doing.  As consumers we are held responsible for this avenue or are scolded if we are not aware.

One judge spoke out that he would divest himself from the case or the stock, which ever I am guessing proves to be the most profitable decision.  You also have to keep in mind that these same companies they are invested in are big lobbyists on the Hill too, so again it’s really worthwhile to keep up today on mergers and acquisitions and how they are analyzing and using their data for profits.  Most of such companies, like health insurers, like United have subsidiaries that just create algorithms and they have their own subsidiaries down the daisy chain and I report on a lot of this so the Medical Quack is a good place to do some searching to save time.

As the article states Vanguard is United’s 6th largest holding, again if holding a position as a judge, you want to be aware of that if called upon to rule on the Healthcare law.  United owns a lot of subsidiaries today to include a company in China and they own a bank too, so again maybe worth checking out the status of investments today.  I know it is kind of strange since companies are so diversified today and PE owners of their firms all making sure all their entities share and use data for profits too.  Medtronic was also listed in this article too and they have big dollars invested in China too, just something to be aware of.

One judge said he doesn’t handle his own investing and doesn’t know where every investment is, well I suggest one would get a hold of a portfolio and check it out.  I

talk about Congress living in the 70s so much here and now we are finding judges living in the 70s too.  Here’s a shortcut to find some major lobbyists that was defined in the GOP Mission for America as the pdf lists staff members that were all former big lobbyists so maybe this listing can help.  Besides that fact, as a judge I think would want to just look at this anyway for my own knowledge.

One other item worth a mention here too is the cost of repealing healthcare reform or parts of it with the data system cost with rulings, something all need to be aware of today ad a legal decision could also send financial structure down the tubes quickly for citizens and we would all suffer.  BD

Three federal judges overseeing challenges to the Obama administration’s health-care overhaul own shares of companies in the industry, including insurers and medical-device makers, the government watchdog group Center for Public Integrity reported.

The Washington-based group based its finding on an analysis of financial disclosure statements filed by the judges in 2009 and 2010. The judges had holdings in investment funds that owned shares of companies such as UnitedHealth Group Inc., the largest U.S. insurer by sales, or owned shares directly in companies such as medical-equipment makers Covidien Plc and Medtronic Inc., the group said today.