This had to be an interesting court case and a new move that I have not heard of to have your office manager fill for the doctor.  The office manager is also required to pay up with some restitution.  If you want a day off, this is not the way to do this 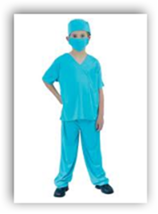 and better to find another doctor, as most MDs would do.  According to the article here the office manager also wrote some prescriptions too.

I wonder how the patients felt about this?  Perhaps this is how this all came to light?  Granted working in a practice you learn a lot about healthcare but not to be exercised to this extreme and what if there had been a call to perform an emergency surgical procedure would the office manager have filled in there too <grin>.  BD

A Columbus surgeon is to spend a year and a day in federal prison for having his office manager pose as a doctor when he was out of the office.

Njoku said none of his patients was hurt as a result of their treatment by Scott-Guiler.

"I have done the best I can to serve humanity," he said.

Njoku has a medical degree from Meharry Medical College in Nashville, Tenn., and has had an Ohio medical license since 1983. The State Medical Board had not taken any action on his license as of yesterday.

Surgeon sentenced to year in prison | The Columbus Dispatch