Could HealthVault Develop a Hack For Kinect Like World of Warcraft Has? (Video) 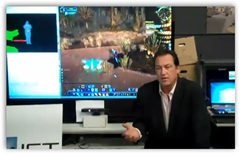 personal health records and efforts of those who are trying to make setting up a PHR fun, and until now there was no way to make it fun as hard as software folks worked at it.  The consumer still knows the difference between a game and work.  Partners in Boston came up with what they called a “fun” algorithm to

convince consumers that applications were fun, but again they are not.  Well now if HealthVault is listening….hmmm…maybe we are on to something here?

Now that you can literally calibrate your body with the Kinect hack from USC it could make working with your PHR a little more fun and there’s also the games that help you get more exercise, so perhaps HealthVault needs to add an interface with using your body to work the program?  Anyone else think this is a good idea?  There could be a separate section in HeatlhVault to store you games and see what your heart rate is while playing?

At the end of the video suggestions are made for rehabilitation purposes for those recovering from orthopedic surgeries as an example.  He also suggests that if you have a child stuck on World of Warcraft for hours, suggest that one hour be done with Kinect.  If you are going to jump around a bit, walk and chew gum and get a heart rate while you are at it. 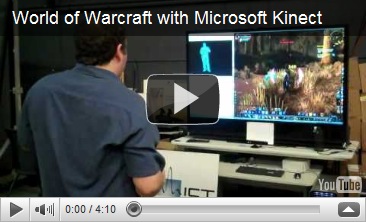 Sean at HealthVault is probably going to think I have either lost my mind here or maybe will start working on a HealtVault hack after reading this <grin>.  Kinect makes a lot more sense than any of the other “game” approaches I have seen around and it gets you up and moving and away from the keyboard too.  BD

A group from the University of Southern California has created the coolest Xbox Kinect hack yet: gesture-based spell casting and controls 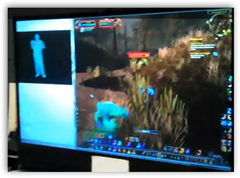 for World of Warcraft.

Currently FAAST is only available for Windows (), but the Institute intends to develop a Linux () version. It also plans to open-source the project so other developers can create more dynamic projects with the toolkit. The Institute hopes that FAAST will help open a whole new world of healthy gaming.