The machine is said to sell for less than 100k, which compared to other products that do the same on the market, a bargain by price.  This is actually a new type of

machine based on semi conductor technology and is referred to as a desktop sequencing machine, well I guess it sits there like a printer?

It may not be the key element to do a full sequence according to this article but there’s lot of other areas to research and speed is also another area to where the technology is slated to excel.  No scanning, cameras or lights required.  BD 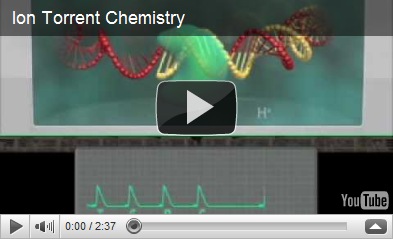 Life Technologies turned heads four months ago with a bold acquisition of one of the hot startups in the field of faster/cheaper gene sequencing, and now it says the new product is ready for prime time.

The Carlsbad, CA-based company (NASDAQ: LIFE) said today it has started selling what it calls the Ion Personal Genome Machine, the first commercial sequencing machine based on semiconductor technology. The instrument is being shipped to “select sites in North America, Europe and Asia Pacific,” the company says. As promised, the machine’s sticker price is $49,500, about one-tenth the price of today’s most powerful gene sequencing tools.

Founder Jonathan Rothberg unveiled a prototype machine this spring that is meant to fuse the principles taught by DNA pioneer James Watson with those of computing legend Gordon Moore. By using semiconductor technology to read the individual chemical units of DNA, instead of using traditional fluorescent tags and cameras, Ion Torrent created a desktop sequencing machine that was said to cost about one-tenth the cost of existing instruments—and could perform a single sequencing “run” for about $500 in a couple hours.