When we hear news of such, it’s reminds us of outsourcing thoughts too.  As the article states this is the second blast/fire this month as another such incident 2 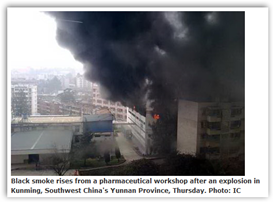 weeks ago also killed 5 people.  I didn’t find any references to whether or not they manufacture for any US drug companies, which is very common these days too or they could have been a supplier for another pharmaceutical company too.

When we hear of drug shortages, this makes me think of the fact that we have no US manufacturers of propofol in the US anymore and are dependent on one factory in Germany and if something like this occurred there, where would we be?

Does anyone else think about such things like the FDA?  Just something crossing my mind this morning.  This is shame for those in China for sure and safety needs to be addressed everywhere and if you read the news today you see safety being scarified all over for the sake of profits.  The Wall Street Journal had the video below.  BD

Five people were killed and eight injured in an explosion at a pharmaceutical factory in Kunming, Yunnan Province Thursday morning. The cause of the accident is still under investigation.

The explosion occurred at a tablet-manufacturing workshop of the Kunming Quanxin Pharmaceutical Company at around 10 am Thursday, according to a statement released by the Guandu district government Thursday afternoon.

About 13 workers were in the workshop when the explosion happened, the Yunnan Information Daily reported.

Two weeks ago, an explosion at a pharmaceutical factory in Huanggang, Hubei Province, resulted in four deaths and five people being injured, China Central Television reported.

"It is common sense that a factory cannot be built near residential areas," Niu Fengrui, director of the Center for Urban and Environmental Studies at the Chinese Academy of Social Sciences, told the Global Times Thursday.

"Scientific urban planning will gather all factories in one area of a city that is far away from residential areas," Niu added.