The short time frame connection was created by MediCity, who was just purchased by Aetna health insurance who is on the path looking for healthcare technology companies to increase profits for the overall company.  Providers even without EHRs can now connect and as previously posted, there connections with Allscripts and eClinical Works and a few others will integrate from the hospital to the doctor’s offices. 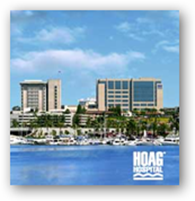 In addition earlier this year they installed an RFID tracking system in the ER room so as a patient you don’t get lost or misplaced by providers or staff.

In other technology news the hospital also plans to offer personal health record integration as as mentioned above with the EHR systems with eClinicalWorks, they already connect with Google Health and HealthVault so patients will have access with both their doctors and the hospital to records shared by either one.  Hoag is taking advantage of the Stark laws with being able to subsidize the purchase of electronic medical records by doctors.

Back in October of 2008 the subsidized percentage with EClinicalWorks was reported to be around 60% so physicians basically get that big discount when purchasing a system. A lot has changed so there could be updates and other vendors in the arena too.

Just due to where Hoag is located they have financial

resources that are quite large compared to other facilities and rooms at the Newport Beach location all have an ocean view.  In August this year they also opened their new facility in Irvine, California.

Novo-Grid is the technology used by Medicity to connect and achieve meaningful use and assure receipt of stimulus funds from the government with meeting eligibility goals.  The Cloud services to aggregate data will be rolled out in a pilot program next year to further compliment the HIE and of course look for some savings with Cloud services.  BD

"Our health information exchange program is already creating tremendous value within our community," stated Martin Fee, M.D., Chief Medical Information Officer for Hoag. "The ability to share data securely and in real time provides our physicians with views of patient information that will ultimately lead to improved care at a lower cost."