drop routine but the device and the treatment program can cure the need for eye drops on a continuous basis.  The website gives a brief description of dry eye.  The device and treatment system is called LipFlow.

“Dry Eye is a long-term chronic disease that takes years to develop. The two main 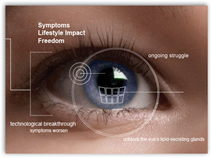 forms, evaporative and aqueous deficient, have long been lumped together as “dry eye”. It’s only recently that researchers have been able to pinpoint the differences and the causes.

Most dry eye patients have Evaporative Dry Eye. This occurs when the water (or aqueous) in tears evaporates at a faster rate than normal, due to an insufficient lipid (oil) layer on the surface of the tear film. It’s a result of blockage in the oil-producing meibomian glands located within the eyelids (referred to as Meibomian Gland Dysfunction )1.”

There are over 65 million that suffer from evaporative dry eye which the symptoms are burning and itchy eyes.  The system has already been approved outside the US and there’s no word on exactly what the device will cost yet. It took 3 years to get the product approved and there are a couple big clinics already using the device in Canada and the cost was estimated to be around 100k, but that was only a guess included by the author of the article below.  BD

A small medical-device company in Morrisville has won regulatory

approval for its system to diagnose and treat a common form of dry-eye disease.

TearScience on Monday announced that it received clearance from the Food and Drug Administration for its LipiFlow system. Company officials hail it as a big breakthrough for millions of patients who suffer from the ailment and rely mostly on eye drops for relief.

It's also a major milestone for the company, which plans to hire up to a dozen more people to handle sales and customer service. While the Triangle is home to many small companies developing experimental drugs or devices, there are few that have received FDA approval to start selling their products.

For patients, the treatment isn't yet covered by insurance, which is another potential obstacle, said Alan Carlson, professor of ophthalmology and chief of the corneal and refractory surgery service at Duke Eye Center in Durham.