iPS stem cells can be reprogrammed to take on another identity and in this case it looks like the mice with liver disease were cured with using their own skin stem cells.  The ISP cells were returned to an embryonic state and corrected the gene 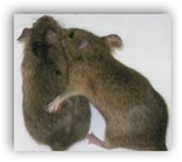 defect.  This is the first time that  a living organism has been cured using iPS cells.

There have been questions raised with iPS cells and according to this article the process provided here with re-programming didn’t create any issues and the one researcher stated the cells are just as stable as working with embryonic cells.  If this progresses, the idea would be to take a person's stem cells and treat them and then re-inject back into the patient to hopefully cure the liver disease.  There would be no rejection since it is the patient's own cells.  If this could be perfected, it would be a huge answer to liver transplants.  BD

The researchers from Muenster and Hanover took skin cells from the mice, returned them to an embryonic state and subsequently corrected a gene defect in the cells. The cells were then used to create healthy mice.

“We have de—programmed the skin cells of mice with liver disease into iPS cells and subsequently corrected the gene defect that caused the liver disease,” Cantz said.