The drug was not theirs though as it came from Bayer Healthcare who already markets the drug in other countries and the market name for rivaroxaban, the Bayer drug, under the J and J approval is Xarelto. Maybe this is a dumb question but one 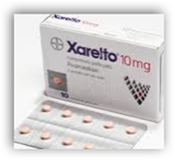 wonders why Bayer didn’t go after their own FDA approval since they already the drug distributed?  Who knows, perhaps J and J had a bigger bankroll or maybe Bayer didn’t want to spend the time and effort?

I guess too with all the recalls maybe this is to be a “good will” step in the right direction?  Who knows but at least it is an alternative pill instead of an injection. Bayer already markets the drug elsewhere in the world.  There’s also Pradaxa that was approved in October of 2010 for blood thinning.

The Food and Drug Administration decision makes rivaroxaban the first U.S.-approved drug that works by blocking a clotting protein called factor Xa. That's in contrast to older blood thinners that work by preventing platelets from sticking together.

The once-a-day pill will serve as an alternative to the popular injection Lovenox, which is the standard treatment for patients who have undergone orthopedic surgery. The drugs had similar results in head-to-head trials, including similar rates of side effects such as major internal bleeding. J&J said its new drug would be priced similarly to Lovenox, which is marketed by French drugmaker Sanofi-Aventis SA.

Rivaroxaban was discovered by German drugmaker Bayer Healthcare, which already markets the drug in 110 countries around the world. New Brunswick, N.J.-based J&J will market the drug in the U.S. under the brand name Xarelto.