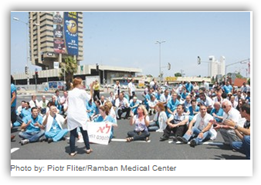 and in this case it’s Israel doctors and medical students wanting improvements in their medical system, sounds familiar with a bit of what we have here.  The medical students said they would not begin their residencies until better conditions prevail.  In a nutshell from reading below it sounds like they want better pay and more staff at the hospitals.  BD

At least 200 medical students from all departments staged a protest outside of Ichilov Hospital in Tel Aviv on Friday, demanding improvements in Israel's healthcare system and pledging support for the months long battle being waged by doctors and residents across the country .
At least 322 of the 400 students in their sixth year of medical school signed a petition saying they would not begin their residencies next year unless better conditions were implemented, Israel Radio reported.

And, what appeared to begin this week as a “rebellion” by “ignored” medical residents and interns, turned on Thursday into a “reconciliation” between them and veteran physicians in the Israel Medical Association as they met at IMA headquarters in Ramat Gan.