For sure there’s some interesting happenings going on at Cigna today and they are getting a lot of money from the State to create those 200 jobs.  What’s going to happen in Philadelphia though, how about those jobs? In addition the former CEO of Cigna who retired now works for these folks in the medical tourism business and the City of Hartford employees will now be able to travel to Puerto Rico for some of their procedures with being the first City to jump on the medical tourism bandwagon.

Now if that isn’t enough they are definitely working those business intelligence ALGORITHMS to figure out how to maintain those record level profits they keep reporting every quarter. If you read the article below, those algos tell them that they can keep additional revenues and profits if they exclude expatriate US citizens from the Medical Loss Ratios?

When you look at the potential of dumping 500 employees in Delaware, and let’s say they follow through with this for argumentive purposes, then we have 200 jobs to be added in Connecticut with some employees traveling to Puerto Rico for cheaper surgeries (which saves money) and then we still end up with a 300 net job loss, so how does this work overall as a corporation and net them $80 Million and from the State of Connecticut?  Anybody looked at the over all bottom line here? Are the 2 states talking about this over all effect since they are both involved? 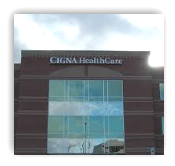 IT’S ALL ABOUT THOSE PROFIT ALGORITHMS ONCE AGAIN.  As stated if they yank 500 jobs and if we end up with a net loss of 300, and that’s only using these 2 locations, how does a loss of 300 jobs = $80 million, is there something wrong with this math?

It just flat out comes back to this same statement I have made over and over, the financial markets and their algorithms are outpacing the rest of us with mathematics and we get fleeced in the long rung, and of course it’s hard to see it as an average consumer as we only get the end results.

It just looks like Connecticut seems to be the next area to where the tourism business and other interests can create additional revenues for Cigna, you think?  This is what I call “subsidiary watch” as they bought this company last year that ins the tourism and expatriate insurance business, so every subsidiary has to throw money down to the bottom line.  I said 3 years ago that the company you knew for years is not the same today as with data and sophisticated IT infrastructures, and selling a hog lode of profile and data on us, risk management assessments are not as clear and the algos created can tend to hide a true reality.

I said 3 years ago that the company you knew for years is not the same today as with data and sophisticated IT infrastructures, and selling a hog lode of profile and

data on us, risk management assessments are not as clear and the algos created can tend to hide a true reality. I can imagine what the insurer data business is worth today as Walgreens as a comparison valued theirs at $800 million.  This is some really laid off employees to jump in and get $80 million out of their cash stricken coffers.

Somebody start doing some math in this country, please so we don’t all die from the “attack of the killer algorithms” .

Those 200 jobs added will cost the state more in other areas as well I feel and perhaps too they will be traveling to Puerto Rico just like the City of Hartford for their medical needs before this is all said and done.  BD

Cigna Corp. said it now will be calling Bloomfield, Conn., home to its new U.S. headquarters.

The headquarters designation is part of the global health service and financial company's move to add at least 200 jobs and upgrade operations in Connecticut within the next two years.

Cigna, which has been headquartered in Philadelphia since 1982, also said it will receive up to $80 million in economic benefits from Connecticut's new "First Five" program. The program, designed as a new job creation tool, permits the Connecticut Department of Economic and Community Development to provide tax credits for the first five companies that add at least 200 jobs in the state by July 1, 2013, or the first five to increase their Connecticut presence by at least 200 jobs within five years while spending at least $25 million in the state.

Insurance News - Cigna to Relocate US Headquarters From Pennsylvania to Connecticut