This sounds like a rerun of Lorena Bobbitt but in this case the garbage disposal is a new twist and this time down in the OC area of southern California.  The couple was going through a divorce and you can hear the police state she said “he 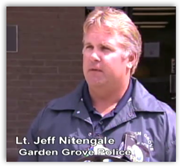 deserved it”.  For some reason or other her picture looks familiar like someone I have come across in my work and I may be off base but she just looks like someone I had a couple words with at one time in a place of business.  I could be off base but there’s something familiar and I can’t put my finger on it as this is not far from where I live and work and in the past I had business dealings in the north end of the county.

When you read through here she had also put something in his food to make him either sick or drowsy and then tied him to the bed.  The paramedics gathered up what they could from the disposal and the man is in the hospital in serious condition as she did at least call after her deed and he was rushed to the hospital.  From what the article says a prosthetic can be built but his plumbing should still be in tact.

If that doesn’t work there’s always the rabbit study at at Wake Forest that may get to the human level one day to where they are growing them.  Back in 2009 one was grown for a rabbit and it worked and he produced offspring too.  Regenerative medicine has come a long way.

The man was taken to UCI Irvine which in the OC being a county facility is really tops for care as it is the best cardiac arrest facility in the OC with 24/7 interventional cardiologists who advise and assist other hospitals and is actually the place to go for heart attacks in the OC, as they have a brand new facility that was opened about a year ago as well.  BD

Catherine Kieu Becker, 48, is under arrest for chopping off her husband's penis and tossing it in the garbage disposal.

After she laced her husband's food with an unknown drug or poison, he lay down, believing something was wrong with the food, according to police reports. Her husband then woke up tied to the bed as Becker cut off his penis with a knife. She then threw the genitalia in the garbage disposal and turned the disposal on, Lt. Jeff Nightengale of Garden Grove, Calif. police, said.