The hospital is closing it’s doors and will be combined with the National Naval Medical Center and this is slated to cost around $2 billion, more than what had been

anticipated as the cost.  Many workers will move and some will find jobs at Fort Belvoir in northern Virginia at a new community hospital.  The State Department will be the new owners and some buildings will be preserved as landmarks.

Soldiers will now have a new place to go in Bethesda and the hospital was opened back in 1909.  There are talks that part of the area will be turned into a shopping center.  The new facility at Bethesda will include 345 medical-surgical beds, 50 intensive care unit beds and 20 operating rooms.  The official date of closure is September 15h when the move is completed.  BD

(Reuters) - The storied Walter Reed Army Medical Center will retire its ceremonial flags on Wednesday, as it prepares to close its doors after more than a century of treating wounded American fighters and presidents. 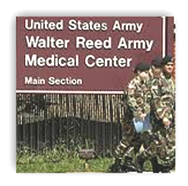 Walter Reed has treated some 18,000 troops that fought in Iraq and Afghanistan as well as U.S. President Dwight Eisenhower, who died there, and Generals John J. Pershing and Douglas MacArthur.

The present facility, together with its current patients, will be moving to a new location in Bethesda, Maryland, throughout August, prior to shutting its doors on September 15.

But the official "casing of the colors" at the 102-year-old institution -- as the ceremony to retire the hospital's flags is known -- will take place on Wednesday.