I think this was the right way to go here being that many still need a lot of IT infrastructure updates and this will serve to give many more time to get through phase one.  With everyone moving as fast as they can and with the high levels of disruption we live with today there has also been some talk about shifting a few other areas of Health IT, such as noted below with ICD-10, and then let’s add on the ACO concept to save money with Medicare. 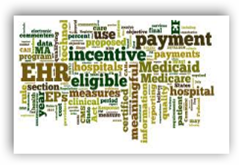 There’s so much going on at once and it is challenging today and sometimes have a toll effect on the CIOs due to not only the government’s side of things, but also we have the every day emerging technologies with vendor solutions getting bigger too.  Of course the larger the organization, the tougher the job can be, depending on what technologies are already in place, what needs to be added, updated…and so on.  BD

WASHINGTON, DC – Farzad Mostashari, the national health IT coordinator, said that he agreed with the conclusions of the Health IT Policy Committee for delaying until 2014 the start of stage 2 of meaningful use, essentially signaling to the industry that federal policymakers will follow the advisory group’s recommendation.

He cited the committee’s reasoning that widespread deployment of the next set of electronic health record (EHR) functionality and updating systems in less than six months -- the time between the final rule that details the required measures and the start of stage 2 -- may be “infeasible, and therefore could have a detrimental effect on keeping providers on the meaningful use escalator.”

In its June report, CMS reported that 68,000 eligible physicians and hospitals have registered for the Medicare and Medicaid incentive programs and a total of $273 million have been issued in incentives.