One More Device Enters the Market to Record Exercise, Nutrition and Sleep Patterns For Consumers–JawBone UP

We have one more into an already crowded market and I think everyone is trying to design what the consumer will use, and then again there’s privacy.  A competitor was surprised recently when the sex activity for profiles and members showed up on a Google Search.  The post below is interesting and also has a link to a story about a guy who hacked his Fitbit so he could have his data directly, without having to use a web based application so he would know where his data goes and who can see it, without it being put up for sale. 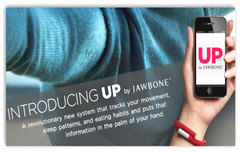 It will be interesting to see if the public takes up with the technology as many buy them and use them for a few weeks until the novelty wears off and then they put it away.  Jawbone makes a lot of other great products but again will this product last or make it?  This one is a bracelet and I’m guessing it comes in different colors is called the UP and you can read a tiny bit more from the preview website for now.  BD

Fresh off its latest $70 million funding round, Jawbone is now turning its eyes to the growing opportunity in wearable health monitors with a wrist sensor product. Called UP, Jawbone’s first non-audio product, is a wristband equipped with an application that combines tracking and analysis of user movements, nutrition and sleep patterns.

Jawbone has made its name with stylish Bluetooth headsets and late last year started selling a portable speaker called the Jambox. UP will leverage Jawbone’s work in wireless technology and will also tap the company’s ability to make small wearable devices with long battery life. The price has not been announced but the device should be available later this year.

The move will also put the company into the growing market for portable health monitors. I recently wrote about Basis, a wrist monitor from Pulse Tracer that monitors not just movement but heart rates, temperature and skin response. Affectiva, an MIT spin-off, also recently released Q, a wrist sensor that monitors motion, temperature and electrodermal activity, which can measure stress, relaxation and arousal. The upcoming devices shows that companies are able to pack in a lot more sensors into small wearable units.