Home » Insurance » Medically Related » My Commentaries » Other Items of Interest » Obama Data Team, BlueLabs Partners With Camden Coalition And Is Going To Crunch More Data With Affordable Care Act, Will Be Researching Treatment Patterns And Data From Those Enrolled In Insurance Exchanges or Medicaid To Search for Math Models

Obama Data Team, BlueLabs Partners With Camden Coalition And Is Going To Crunch More Data With Affordable Care Act, Will Be Researching Treatment Patterns And Data From Those Enrolled In Insurance Exchanges or Medicaid To Search for Math Models

Do we have enough folks out there crunching data today <grin>.  I guess not as the company 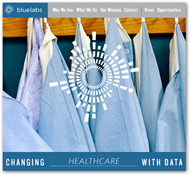 that helped Obama with his campaign, BlueLabs is now turning their focus to Healthcare.  Oh gosh, same old thing with trying to figure out what’s driving the cost of healthcare costs and how to better serve patients.  Who isn’t doing this today?  You have hospitals with big software expenditures searching their data for better care and costs, HHS and CMS with their data searches, all kinds of commercial companies selling software to help almost anyone out there that want’s to dig in and maybe that’s part of the cost and treatment, all this research that has yet to lay a “golden egg” anywhere.  Sure analytics is helpful and you need it but I just keeping reading over and over and over and over all the same textbook stuff, written goals, missions, etc. and they all sound the same anymore <grin>.   Is anyone really getting their missions accomplished I wonder?

So maybe this group at BlueLabs will get some additional data crunches from the Camden Coalition to crunch a little more with additional data to use?  If we just had enough money around to pay for a lot of the treatments and care patients receive I bet we would see a reduction in all the analytics folks out there, maybe?  Here’s a PBS video from 2011 about Camden, one of the poorest cities in the US, so make healthcare cheaper here as a model?  Well that’s what someone thinks could provide answers and sure analytic help but getting the actual care out there is the big thing and Camden is still poor in 2014 and still needs money.  Analytics are great to find where to spend money to help for sure.

So is the BlueLabs group of computer scientists going to provide the goose that will lay the golden egg here with analytics…time will tell I suppose.  One you get the data and make your conclusions, you still need part two and that’s to act or execute your models.  One thing that is important today too is the over whelming sale and buy in of many who see models as a bunch of algorithm fairies out there too.  Sure there’s some good stuff that comes out of all of this too but separating fact from myth with too much focus on a virtual world of analytics opens up other issues as well, again with too much confidence in what’s being created and we are seeing that process starting in many areas with over confidence and models built that just don’t stack up, but as Professor Siefe says in his video at the link below, hey you put a “math formula” out there with a square root in it and if even it is nonsense, everybody buys in as it has to be right..not always so.

So let’s see what the next group of math models here presents as they dig around and use consumer data to track and follow.  I still say “money” is the ultimate answer here and the redistribution.  If you take a look at what the ACA is doing in essence, it is breaking down the math models that lacked ethics that health insurers used for years to profit, so there’s the clash

and rub and everyone thinks some phenomenal math models and algorithms are going to save the day.  BlueLabs are looking for computer scientists, and perhaps they haven’t found this outlet yet where one can be cranked out in 12 weeks for them <grin>.  It’s been commoditized too.

Just me thinking out loud, why in heck doesn’t he send these folks over to help old Kathleen Sebelius, gosh knows she needs some data mechanical logical thinking with what have seen and heard from her and she really seem to believe in the “algo fairies”, just shoving out Healthcare.Gov before it’s time certainly gives you one screaming example there of some very weird perceptions, and she runs the whole agency?  Huh?   Get some hands on with here for goodness sakes so we can stop the silly stuff she says that appears in the press, send the BlueLabs over there to help her out as maybe if they explain how predictive modeling really works she would get so duped.  Here’s one perception that stick out like a sore thumb when ordering a study on the Healthcare.Gov website..do they have these technology experts to to disburse to tackle such a report, of course not the White House had to bring these types of folks in…<grin>, so yeah BlueLabs, take some time and educate Ms. Sebelius if you would…the Sebelius Syndrome…and she’s not the only infected as it spreads through Congress like wild fire too.

Senators Letter to HHS Regarding Fraud Reform Tools–Oddest Thing I Have Read in a Long Time and Really Makes A Huge Case for Reinstating the Office of Technology Assessment!

So we have the same thing here that Richard Cordray is trying to do with his consumer financial agency, build a data base and run those queries to get educated..hmmmm…yeah..it all takes a while to do though..so don’t hold your breath, still say it’s easier to hire some Quants from the other side to cut to the chase..ho hum…they have a lot of these numbers and processes already known and working.

Of course everyone reading this is going to now worry about who has their data with the BlueLabs project?  Not any different than what private industry is doing sucking all and any stick of data they can get their hands on and selling it.  I’m not going to go there today but rather

emphasize one more time we need to license and excise tax all data seller to form an index to identify a group so we can regulate…drives me nuts to see all these potential bills and laws out there without it, and usually are created by a bunch of lawyers who are stuck on verbiage and ignore the code for profit running wild on servers everywhere.

So again on thing that stay constant if you reference Camden, they still need money and the math models may help with where it spent but it’s not going to pull money out of thin air, that’s for sure.

One more thing that bugs me too and that is the Presidential Twitter feed, used to be good but now  just a bunch of templated stuff now like big corporations puts out, more noise now than content sadly, so maybe these BlueLabs  folks can do something there too?  BD

A group of data analysts who helped President Barack Obama win two terms in the White House are now partnering with a coalition of health-care providers in Camden, N.J., to study how people’s consumption habits change under the new health law.

BlueLabs, a company formed last year by members of the Obama data team, is partnering with the Camden Coalition of Healthcare Providers to compile information tracking the treatment patterns of people who enroll in Medicaid or the new insurance marketplaces under the Affordable Care Act.

For example, the team will gather data on how frequently the newly insured go emergency rooms or outpatient health centers and compare that with their previous behavior. The goal is to help health-care providers and policymakers in other parts of the country understand what is driving health-care costs and better serve patients’ needs.

The collaboration will build on work the Camden Coalition has been doing in New Jersey for years. The Coalition, which is comprised of doctors, nurses and other health-care administrators, started gathering patient data years ago from the three major health-care systems in Camden. The coalition eventually compiled that information in a central database that helped local health-care providers improve outcomes and bring costs down.