Home » Insurance » Medically Related » Other Items of Interest » Medicare–Admitted or Under Observation Is the Question With Thousands of Seniors Getting Hit With Rehabilitation Bills They Can’t Pay, Law Suit AHA Vs.Sebelius Continues to Be Litigated

Medicare–Admitted or Under Observation Is the Question With Thousands of Seniors Getting Hit With Rehabilitation Bills They Can’t Pay, Law Suit AHA Vs.Sebelius Continues to Be Litigated

The number of patients under observation has increased tremendously.  This is becoming a bit issue with 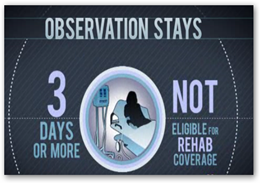 Medicare not covering rehab if patients were not “admitted” but were only there for observation.  The video tells a story of a woman who go caught up and faces a huge bill of $28,000.  The video continues to state there were more than 600,000 cases just like hers.

There’s a discussion here with the American Hospital Association that further discusses how this works and how hospitals are squeezed by Medicare.  Medicare also comes back and audits and looks for inpatient billings they believe to be in error with being admitted and years later can come back and charge the hospital back.  So a patient years later due to an audit gets huge bill and is stuck.

Medicare would not give an interview for their side due to pending litigation on this topic.  The lawsuit was filed back in 2012.  The case is American Hospital Association v. Sebelius, 12- cv-1770, U.S. District Court for the District of Columbia (Washington).  Its hard when you come in later and look at cases as things can look very different with data than actually watching the documentation during actual treatment and/or surgery.  Then at the end of 2012 there was the infamous letter by Sebelius sent to the AMA and other medical entities accusing them all of being cheaters with nothing brought to the table.  She even has to twist the arm of Eric Holder at the DOJ to ink his name on it.  Maybe why this is why this odd accusatory letter went out?  Well we know Kathleen Sebelius is the new  expert in Health as recently she jumped right in to help the state of Minnesota with a recommendation for a  new contractor (choke and grin) to help fix their insurance exchange.   It’s even funnier they asked for her advice.  Here’s the back link on the big bad “we know you are all cheaters” letter.  BD

Word is to challenge and ask…last year I went through some of that with my mother before she passed on.  She had a good doctor who knew how to work the parameters but it shouldn’t have to be that way.  BD