Home » Insurance » Medically Related » Other Items of Interest » Veterans e-Benefits Website Is Down, Investigation Ongoing For Breach or Glitch Generated, Website Was Kicking Out Data & Information About Other Members

Veterans e-Benefits Website Is Down, Investigation Ongoing For Breach or Glitch Generated, Website Was Kicking Out Data & Information About Other Members

Has anyone had enough security breaches yet?  As story says he called and even called 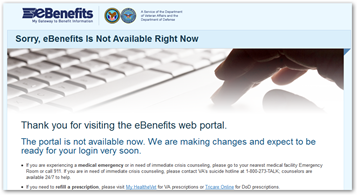 his Congressman to make it known and no word back and then the website was taken offline.   It just so happens the individual accessing his e-Benefits is also in the IT security  business so he knew immediately.  He was getting records and data of all kinds of other members…no word yet if this is a glitch or breach…but I guess if others received information on other members, then it is both.

I just checked now and the site is still offline.  Here’s what the VA said yesterday…BD

“The Department of Veterans Affairs (VA) takes seriously our obligation to properly safeguard personal information.  Wednesday evening, during a process to improve software supporting the joint VA and Department of Defense benefits web portal eBenefits, VA discovered a software defect. During that limited timeframe, some Veterans and Servicemembers who had registered and logged into eBenefits were able to see a combination of their own information as well as data from other eBenefits users.  VA took immediate action upon discovering the software defect and shut the eBenefits system down in order to limit any problems.  VA is conducting a full review to be certain the underlying technological issues have been resolved before the system is returned to operation.

VA's independent Data Breach Core Team (DBCT) is reviewing this issue and believes a relatively limited number of Veterans have been affected. Once the DBCT determines the number of users impacted, their identities and other pertinent facts, VA will take the appropriate response, which may include free credit monitoring for the affected individuals, consistent with VA's standard practice.”

"I was hoping it was just a glitch, but the more I thought about it, I said, wait a minute, this is more than a glitch, this is a breach," said Woodland.
Woodland was on the Veterans Affairs e-benefits website trying to track down his own history for a bank loan, but the site kept displaying other veterans' information, both medical and financial.
Woodland said he called the DOD, the VA, and even Senator Hagan's office, but didn't get any response until the website went down and an email came in from the DOD asking him to scan the few pages he printed out and email over.