Home » Medically Related » My Commentaries » Other Items of Interest » Technology » Movie “HER”– Good Example On How Folks Can’t Separate And/Or Unite The Virtual With The Real World, Billionaires Are Made Out of Those Who Know How to Keep These Areas “Gray” With Creating and Maintaining The Addictive Code That Does It…

Of course the movie is an exaggeration and is for entertainment but when you look at how this man is existing it’s not far off from what we see out there today.  We have a lot of quantitated 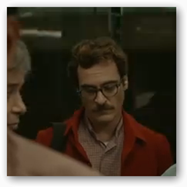 justifications with a lot of marketing and a lot of computer code out there.  I wrote about that a couple months ago and observing some of this long before the movie came out.  I’m totally logical though and that’s what drives my thinking.  Learning how to write code did that to me, not on purpose at all, just a by product.

If you have been on a dating site and I would guess over the age of 40, you kind of see some of this already as folks settle for emails with many people that just want to chat and really don’t want make themselves available for a relationship with another human and have settled for that.  The mathematicians that write the algorithms for the sites are very smart and know how to keep people addicted and coming back so they get more ad exposure and clicks and make more money.  It’s really sad but that’s the reality and one site will even send you flow sheets and stats, which of course is yet one more addiction…in the video clip below Professor Siefe does a good job with telling you how this happens and how they play on the ignorance of math.  You can watch the entire video in the footer of this blog.

Even the other day we had Mr. Perkins, the millionaire have a public meltdown feeling he was being picked on by the poor so both the rich and the poor are sucked in at different levels to virtual worlds and it is getting

to be a problem as people don’t know when the virtual world leaves off and the real world begins and the same with the values. I watch people that go nuts on Twitter and re-tweet every stat or infographic they see…and some are good of course but you really need to be a skeptic on some of this.  Good essay here on being a skeptic from a former Wall Street Quant who knows all about how financial models lie and hide risk.

Who better to listen to when one who has been there, but she’s over on our side now and not working in the virtual worlds that suck in both you and your money too.

Facebook is very financially successful virtual world as everything you do there is virtual and it’s a bunch of algorithms that from time to time dump your personal data on the web and addict you to their algorithms so they mine and sell your data profiles and increase their ad business.  As you cans see, Wall Street loves the virtual worlds and the confusion it creates as they make big money off it and do anything needed to build the perception that you can’t live without it.  Watch video #2 below, the quant documentary and some veterans of Wall Street tell how it works as they used to do the math models.

So when you think of the virtual female in the HER movie, think of the financial wizards that know how to create HER and let the virtual world into you bank account and you even feel good about it as the algorithms and models are created to make you feel that way, like you got something..well mostly what you got was being connected to something with no tangibles to speak of.

The virtual world will win when we can all fry a “like button” in a skillet and eat it for breakfast.  Bill Gates is one of the few that keeps this in check and you heard him say back in November that getting connected to the internet is stupid. Davos needed a good whack of his logic but I don’t think it happened, link below.  His words not mine but they are true and I hoped that he could have addressed it at Davos as all you needed to do was listen to the Pepsi CEO and she was way out there and just complained about the press.  Well the news is the vehicles that the bots react to that move stock and are starving for income now.  She didn’t see that side of it and again was so in her own virtual world she couldn’t see the big picture, otherwise she would be throwing some serious advertising money at more news papers.

This is really is an issue as I have said and if you suck up all the marketing, stats, surveys, etc. you come across, well that’s your gateway to being lost in the real world and not able to stay in touch with the real world where those models don’t work…”people don’t work that way”..quote from Emanuel Derman, former Goldman quant featured the Quant documentary, video #2 below.  I’m telling you when the folks that are physicists, mathematicians and computer scientists that know how to get you addicted

tell you how it works and you don’t listen, then you get stuck with not knowing how to apply and work with technologies in the real world.

There’s good stuff out there too and that’s the problem and where it gets gray as you have so many marketing folks pouncing on you at every turn.  Heck I even have Microsoft in my face pushing Facebook, well because they own a portion of it with stock.  So when I see that, they just want the stock to go up, don’t care about you or me:)

Mike Osinski is very good too with his explanation, he wrote the software that banks used, remodeled and abused for subprime..”with software you can do something about everything” and then he talks about his oysters, and says “that’s what matters, the real world as you can be totally absorbed in a fantasy software world”..voice of experience from when he was programming as he said he didn’t even know what day it was at times as the concentration is that fierce (and I’ll agree there being a former coder) and “you can’t be wrong”…

I get addicted to writing about it as myself  being so darn logical and being able visualize the data mechanics I walk around see it all the time with people not making sense and looking for algorithm fairies.  No you can’t wish and pray for for code or for code work right…doesn’t work that way.  HHS thought so in October though (grin).

More videos at the Algo Duping Page from people smarter than me with a lot of logic who visualize even better than me and they will make you mad if you begin to understand the process and how you are duped and duped again.  Of late too, the White House has been kind of duped too with this templated marketing campaign I have seen in other places, like MasterCard getting in to everyone’s digital pants , and not much there worth watching there either as most of it seems to be targeted at the level of a 5th grader and there’s no time for “dummy down” stuff where I come from, but that’s just my opinion and what I see.  Now that I see Facebook in partnerships with Barclay’s bank, one more reason to be cautious as now you have Quant at the banks and data scientists at Facebook collaborating for more that mine and sell your data a and hide risk at the same time so Zuckerberg gets richer and the bank makes money at it too.   BD

MasterCard Recruiting Software Engineers For New e-Commerce Technology Lab, Maybe More Slicing and Dicing of Our Data To Sell to Insurance Companies for One? Be Wary of Corporate “Algo Dupers” Out There Feeding on “Non skeptical Consumers”…